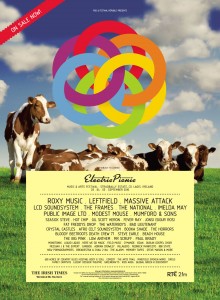 For the sake of those who are not so into their music, I’ve kept this part separate. If you’re not much of a music buff, look away now. If you are, here’s my take on Electric Picnic, musicwise. I must admit that when the line up was first announced I was far from impressed. At 240 Euro a ticket, you really expect some massive headliners, and I didnt really feel this line up delivered that. Still, the further down the bill you looked, the more impressive it got, and there was rarely a time when a music addict like me didn’t have something pulling me to another stage. Here’s the day by day breakdown:

FRIDAY The first day of Electric Picnic is a half day. Okay, it’s only a few hours less than a full day, but given the price of the tickets, I did find that a bit cheap; surely they could have found the bands to fill the extra few hours and make the festival into a full three day affair? Anyhow, when it did get under way, I started off with Cloud Castle Lake, a spaced-out Dublin alt. rock band who take a lot of their queues from Arcade Fire. Very nice, relaxing stuff after the first beer or two of the festival. The rest of the afternoon I spent indulging in some bands I know a bit about, but hadn’t seen live before. Chew Lips had some decent (if hardly groundbreaking) danceable electro tunes, while Hurts – whose new album is out now, but wasn’t until the day after the festival – play a real 80s style music reminscent of Simple Minds. They’re very arrogant on stage, but given time and a bit of recognisability might just have the songs to back it up. They might also annoy the hell out of people, that remains to be seen. Janelle Monae, on the other 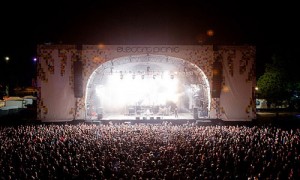 hand, is all about the performance, strutting out in a cape to play and eclectic brand of urban soul that’s so diverse it’s hard to believe she’s still new to the scene. Very much one to watch. The worst part of the day for me comes with a three way clash – three bands I really want to see. I opt for Modest Mouse, who have a reputation for eccentric and lively performances, but they turn out to be a bit dull. The biggest single ‘Float On’ is superb, but overall they struggled to keep my interest, and I wondered off in favor of the angsty math-rockers Foals, who are ridiculously energetic and highly entertaining. Definitely a good move, though missing Sigur Ros’ Jonsi (the third of the three way split) is still a bit of a sore point. The headliners, much like I expected, weren’t up to much on Friday: Roxy Music were just dreadful, we left after about three songs to walk via Public Image Limited, who were screaming their nuts off in a typical ‘I’m a former Sex Pistol’ way, but not really winning over Helena, so we ended up stood in front of Eels. Eels seemed to be choosing their folk-rock stuff over their more sedate options, and we eventually abandoned all three. Still, a good day all in. 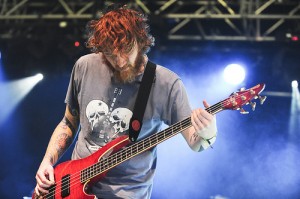 SATURDAY Ah, a full day. Having had a reasonably early night (it’s all about the music, mahhhnnn), I was in the Body and Soul arena early enough to stumble into Ryan Sheridan, who I see around Dublin every so often. He’s perfectly suited to morning breakfast music, with a lively acoustic sound to his music and plenty of wit thrown in. It’s the incredible And So I Watch You From Afar who have me scrambling out of bed, though. I came across these guys almost two years ago, after being given their earliest material to review, and despite mashing together punk and instrumental music, they are genuinely one of the best live bands I’ve ever come across. The energy at half one in the afternoon was unreal, and the crowd looked like it had been slapped around the face with something. Total genius. Channel One, another local bunch, weren’t bad either, but it’s hard to remember them when ASIWYFA had already blasted them out of my mind. Having spent a few hours of the afternoon wondering aimlessly and smapling the food, the invariably crazy Crystal Castles were the next stop. I don’t know many bands that incite more hatred amongst punters, but I think they’re brillaint live. Sure, Alice Glass can easily be summarized as a screaming lunatic, but she does it in a way that’s extremely dancable and has this tensile energy I just love. They’re a ‘hipster’ band, but so what, I love ’em. Of course, a quick stop off at Hypnotic Brass Ensemble – an unlikely but impressive fusion of a brass band and hip-hop beats – was inevitable, but they just seemed poor next to the intimate shows I’ve seen them play 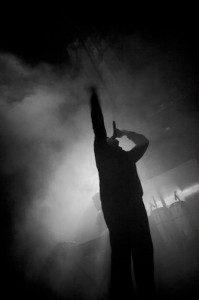 before. Hot Chip are without their lead singer right now, but if you ask me they’re a whole lot better for it, and played an absolutely stunning set of classics, keeping us dancing until even relentless jelly shots and smuggled in cans couldnt stop the overheating. Great show, and it was touted by many as the preview to ‘LCD Soundsystem‘s last Irish show’. LCD Soundsystem are a band I’ve wanted to see for a very, very long time, and loads of people came away from this one saying it was the highlight of the festival. For me it never really took off, and I ended up wishing I’d chosen to watch The Frames instead. Glen Hansard did wonder past in the last few minutes, though, and we shared a whiskey, so at least I got to meet him. Again, a few minutes of headliners Leftfield comfirmed our initial suspicions – not good enough to headline – and we opted for the campsite instead.

SUNDAY The final day of a festival is always greeted with that horrible feeling that no matter how much you’ve tried to wash the greasiness is going to stick around until you grab a shower. It’s not something that The Riptide Movement easily dispell, playing a s

harp, old-school brand of roots rock. O Emperor, though, are as interesting as ever (a real ‘one to watch’ in Dublin), and have the misfortune to be followed by Stornoway, who are probably the highlight of my entire festival. Stornoway are a quirky little folk-rock band fronted by an obviously nervous lead singer, and made up of a group that are so obviously delighted when they walk out to a packed tent (ten minutes after soundchecking to an almost empty one) that you can’t help love them. Opener ‘Battery Human’ is a song I still haven’t got out of my skull, a quiet ditty about modern life, but the rest of their set had a bit more oomph. Love them. Beardyman is an interesting aside, producing a set of beat-driven randomness using only sounds he can make with his own body (beatboxing is genius, but it gets old a bit quickly for me). Two Door Cinema Club are a Northern Irish band who any one who knows me has probably clocked by fixation with by now, and they make me dance like a total lunatic (just brilliant), before Friendly Fires do exactly the same with one of the best main stage sets of the weekend. They’re edgy and varied, and lead singer Ed can dance like more of a fool than pretty much any other single I’ve ever come across. Mumford And Sons could not be much more fashionable in Ireland right now, and they are fantastic live performers, especially when the sing along moments come along, and you’ve had a few too many jelly shots (see Little Lion Man – “It’s not you fault but mine, it was your heart on the line, I really f*cked it up this time, didn’t I my dear…”). Yum. Our final act of the festival turned out to be The National, who remind me very much of Interpol. I like them, but not quite enough to buy the album, though I can see where the fixation comes from. They’ll probably go a lot further than they already have. Of course, the evening should have finished with Massive Attack, but the heavens opened, and we stood sheltered by the sound tower with 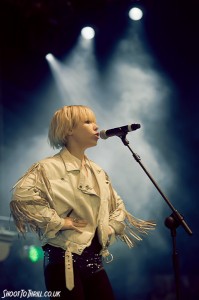 thousands of others in the pelting rain, getting noticably sicker by the minute, for just long enough to see their opening quarter of an hour or so. I must admit listening to ‘Teardrop’ from the tent whilst partying the night away tore at me a little bit. They’re a truly brilliant band, and I have to see them properly (rather than just the opening) sometime when we’re not caught in a thunder storm.

All in all, though, the weekend’s music was great. Stornoway, Hot Chip, Crystal Castles, Foals and Two Door Cinema Club were the highlights, and despite the lack of big headliners, I really enjoyed it, and caught a lot of bands that I’ll be bothering with again in the future.

Did you make it through all that? Nice work!