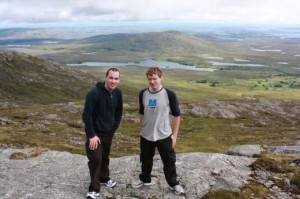 Unemployed in Galway. Or not so much now, I have enough articles due to occupy me for four or five hours a day (a total of around 180 to do over the next three months, in fact, with a minimum of 15 due a week introducing countries and cities around the world, on top of my regular work load) and bring in enough to pay the rent and food bill, but the same money restrictions still apply, if I don’t want to be in real financial trouble anytime soon. The last few weeks I’ve been trying to entertain myself without blowing the budget, here’s what I’ve come up with:

Climbing in Connamara: The almost non-stop rain in Galway has one major benefit (Irish summer: a massive oxymoron) – some great, soggy marshland hills nearby to go climbing up. Last weekend we decided to go to Connamara and climb a random one, which happened to be covered in sinkholes and grassy wetlands that made it quite adventurous. It took about five hours to scramble over the rocks to the peak, where we found a triangulation point and a tiny lake, as well as pretty epic views down to the Galway Bay coast (see attached picture from halfway up). Great day, despite the stomach-damaging pies we ate on the way up.

Poker: A group of Helena’s old friends play every Thursday, until some ridiculous time in the morning, and I’ve angled my way in on the games, as you do. I’m not very good, but it costs less than going to the pub and there’s always a small chance you’ll leave with more money than you arrived with. Though in my case it’s a very small chance, especially when I insist on trying to bluff a 2 and a 7 with most of my stack of chips. Something to bear in mind next time!

Roisin Dubh: Galway’s most famous Indie venue is only about five minutes walk down the road, and has an endless rotation of bands, including at least a couple of week that are completely free. Again, much better than just going down the pub. Last week we saw an impressive gig from Dublin lasses ‘Heathers’ playing under the slightly disappointing fashionable electro band ‘Hooray for Humans’ (click for my State Magazine review), and there’s a good selection more I’ll be taking a look at over the coming weeks too. Very nice little venue.

Jogging on the Seafront: It’s windy, invariably washes half a ton of sweat into your eyes as you run, and tires you out at double the speed of running away from the seafront. But it’s great fun.

Chilling at home with endless DVDs: We’ve barely made a dent in the huge selection of copies I bought in Nepal yet – several hundred episodes of various decent TV shows. Good thing, as we don’t have our NTL sorted out here yet.

I’ll be back in the UK from the 24th of August to sometime in early/ mid September (probably the 8th or 9th), so if anyone’s in Salisbury over that time let me know. I’ll be putting in appearances at Reading Festival (Sunday only) and probably Bingley Music Festival in Yorkshire as well. If I can afford it I’ll drop in to Warwick and London, but that’s looking a little unlikely on the money front. We shall see.

Hope to catch up with a few people then,

One last thing… those of you who know my personal stalker, Mark Jones, might be interested to see his new blog here. He couldn’t resist making a blog you see… I have one ;).