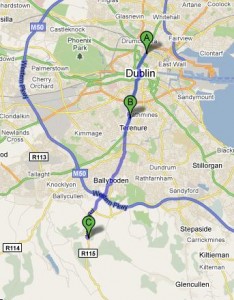 Ouch, what a mission. I’ve been meaning to hop up to the notorious Hellfire Club in the hills south of Dublin for some time. I knew it was a steep climb, but at only around 30kms round trip from my place and in what I thought was reasonable weather, I didn’t foresee too many difficulties, and a visit to an abandoned spooky building on my bike for in nicely with a couple of my New Year’s aims – to get fit for the wedding and to see a bit more of where I live.

It didn’t occur to me, though, that the weather would be so difficult between Dublin and the very northernmost part of Wicklow. Right outside Rathfarnham, a suburb perhaps 8kms from the city centre, the road turned into a steep slope (Google has it down as a 12.5 degree hill for just over 3kms), and about 1km up said slope, the road was utterly covered in snow with absolutely no effort to grit it. I’m an inexperienced cyclist and not exactly in the best shape of my life (just yet!), so for me this was to some extent the beginning of the end. I found myself half cycling, half walking up one of the least grippy roads outside of northern Nepal, and what should have been a fairly casual Saturday afternoon ride ended up taking the best part of two hours. Fantastic views down to Dublin, though. 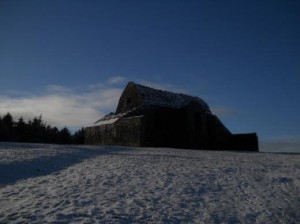 When I eventually made it to the Hellfire Club, there was a nice gentle walk (by which I mean a short walk that seemed extremely severe after my uphill cycling ordeal) before arriving at the derelict building. Hellfire Club is just under 400 metres above Dublin, with a great view down to the city, and has quite a history. The original site dates back around 5000 years, though what’s left of the circle of boulders from that time was buried under enough snow so as to be basically invisible. The building itself is an early 18th century hunting lodge. It suffered a lot of early damage, which is meant to be a consequence of largely destroying the original stone circle in order to build the lodge (the work of the devil).

Inside it’s a two floor mossy building, nothing much left but an eerie concrete shell with plenty of damp, dingy corners that are black enough to imagine all kinds of creepiness going on. After being abandoned as a Hunting Lodge, the Hellfire Club took over the building, and is meant to have left an empty seat at everyone of their meetings in honor of the devil. Local folklore says one curious observer left the building deaf and dumb after sneaking in to see what happened inside, and never spoke again. There are other stories of murders and continued satanic activity. 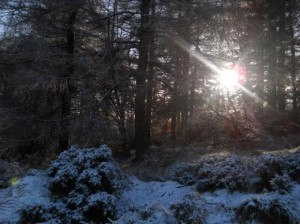 It’s obviously just a building, and a well placed one at that, but I can see where all the mythology comes from. It’s eerily silent and I wouldn’t want to spend any length of time in any of the rooms in the dark, but the history seems to speak louder than the building itself. To get an idea, I’ve attached a few pictures, though it really could be a whole lot better with a wide-angle lens, as the walls are pretty cramped so the indoor ones didn’t really come out.

The ride down, of course, was epic. I did the entire thing in around a third of the time it took to get up, though my hands were so cold by the time I got back into the suburbs that I had to stop about 15 minutes from home and do that painful ‘warming them against a hot coffee’ thing. Definitely worth the effort, and home in time for Saturday afternoon football! I’ve been aching since, mind…