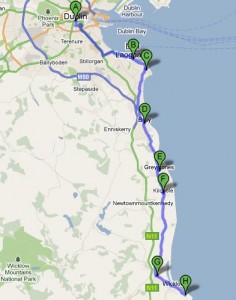 A month or so ago, I invested in one of these (link is for the bike in the picture). It was probably more than a month ago, in fact, it’s just been sat in the spare bedroom at home while work was still heavy at the end of the summer, and I hadn’t really had a chance or the inclination to make use of it. The last week or so, I’ve started putting that right, and I have to say I absolutely love it. There’s something really nice about just watching the countryside fly past (maybe that’s a touch optimistic, it could be more like crawling past), and I’m starting to warm up nicely into perhaps doing some longer trips. Dublin to Galway over a weekend is one I have a particular eye on, but I’ve been a little bit more modest in my effort so far:

Dublin to Wicklow (town as opposed to Wicklow county) via Dalkey, Bray and Graystones (around 58kms) – South Dublin has a certainly vibe to it. It’s probably the most ‘English’ part of Ireland (South Dubliners get mocked relentlessly for their accents and self-absorbed outlooks here), and invariably the home of people with more money than sense (or so much money that sense doesn’t come in to it – see Bono, Eddie Irvine, various members of The Corrs and Enya, all of whom live there). Given that parts of the south are so rich, though, perhaps it’s not such a shock that it’s amazingly nice.

I decided to head off reasonably early on a Sunday morning to avoid (read try to get into the middle of) a big storm that never really materialized, despite the front pages of every paper showing coastal roads blocked in with sandbags. Just outside the city centre, you start to arrive at a ‘the coastal road’ that takes you south through the tiny picturesque harbor of Dalkey (which is far more beautiful than I remember it being when I dropped in there for a student’s leaving party a few months ago). Just off the coast, across the Dalkey Sound, there’s an island with lots of abandoned buildings. There are churches and defensive structures, and aside from one of those viewer platform things, the little bay could have come straight out of the century before last (sorry about lack of pictures, Helena had the little camera for wedding dress pics, and no way I was lugging around the big one!).

The hill from Dalkey over to Bray was a bit of a struggle, but I’m going to have to get use to it if I’m going to be using the bike around the Wicklow hills, which was the original plan (hence the mountain bike). The coastal road dies a little after Bray, and you have to cut inland and back to the coast again to get to Graystones, where a friend met me for fish and chips (sure I looked an idiot in shorts and a raincoat, but it seems to work for cycling, and it’s definitely better than lycra!). The coast changes quite a bit at Graystones – it’s a small outer commuter town, and the beach seems to be muddy but nicely rugged, without any of the islands offshore. It seemed a better bet for summer beach days then Bray, if only because it’s quieter and a little bit sandier.

From Graystones to Wicklow was just a small country lane for about 22kms, being slowed up along the way by my fish and chips, only to arrive and find Wicklow train station closed. It seems to open sporadically on Sundays, though I didn’t know that at the time. Fortunately I happened to come back a few minutes before a train and spent the time in the middle exploring a wrecked old castle on the sea front and cruising through a really quiet town centre looking for coffee, or watching a bit of (diabolically) low-level football.

It’s really interesting to see how defensive the Irish East coast actually is. There are an incredible number of castles, turrets, walls and even cannons lined up along the hillsides, and in some points the old rural set ups still stand out – things like water pumps and lots of stone walls, most of which seem to have been pulled down in the UK. The coastal road is stunning, and given a decent days cycling (once you take out the break for lunch I doubt I actually did more than about four and a half hours) you could get a long way in the single day. I guess the thing to do now – both for the sake of looking good in my wedding photos and making the most of the bike – is to make sure I do that.

Mini Trip – Dublin to Howth and back – Barely worth mentioning, but I felt like a quick cycle just to get used to the bike before heading off too far. Between our house in central/north Dublin and Howth you come to an island called ‘North Bull Island’, which is great fun on a bike in the sand (mudguards needed), before carrying on to the top of the hill in Howth and staring down at the lighthouse and the hikers on the summit. Howth a really just a picturesque hilltop and a nice seaside community (with an occasional market), and the ride was harder than perhaps it should be, if only because some serious wind was blowing off the Irish Sea. Good for working up a sweat, though.

The bike’s yet to really be tested – I think by any real standards, 59kms isn’t all that far on a bicycle, but hopefully I’ll get the chance to spend a few more days going long distance and exploring Ireland on the cheap. In the cold, if this week is anything to go by.