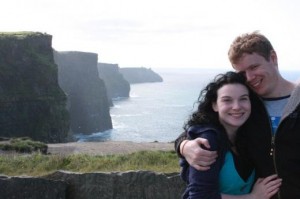 The Cliffs of Moher, apparently, are one of Ireland’s most impressive attractions. I say apparently, as before this week all I knew about them came from the mouth of a particularly annoying 7up advert, in which a smelly-looking hippie screams “Moher, Moher, Moher” at an insanely irritating volume. That and the fact that I can’t pronounce the word Moher (apparently when spoken by a Wiltshireman, it sounds like “more hair”. Seeing as I couldn’t hear the difference, I resorted to simply referring to ‘the cliffs’ to avoid ridicule for the rest of the day. It wasn’t very effective, largely because there are many other ways to ridicule an Englishman in Ireland).

So, Kenna, a friend of Helena and I from Korea, came down to Galway, and it would have been a real shame not to do something good. And with four of us split the cost, a trip to ‘the cliffs’ seemed like something good. After spending the night before sipping beer on a frosty Lower Salthill beach (and Kenna learning rule number one of Irish drinking: never mix Guinness and wine), I collected our nearly new Astra and we headed down south to County Clare. The roads down there are phenomenal, winding down the rocky, muddy seashore, through tiny windswept villages and hills that – due to sheer quantity of rocks – appear a morbid gray against the skyline. We stopped half way, just to stand on the wave-smashed rocks and stare into the water. It really was unbelievably beautiful. 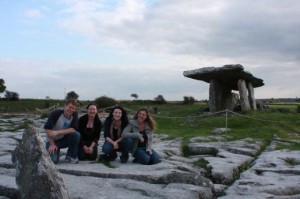 By the time we arrived in Doolin – the nearest town to Moher – we were all hungry, so we grabbed a pub lunch in an establishment that seemed to be famous for its trad music, and headed over the hill. I was expecting them to be big, but the cliffs are truly huge. Walk past a sign saying ‘extreme danger, do not pass this sign’ (everyone does it, what can I say, I’m a sheep…) and you can stroll unsteadily along the edge of a 200 metre drop, staring down at the sea of along the peaks into the distance. In one direction a turret towers over it all, just far enough in to avoid risk of the cliff collapsing and taking it down into the sea. It was sunny enough to eye the Aran Islands in the distance, and the views along the coast were truly exceptional, as was the clever tourism centre, well designed to avoid breaking up the natural beauty of the site. I could almost forgive that 7up hippie his Moher chant at this point, though he did fail to mention that a bottle of drink costs 4 Euro. I guess that might have come across as curbing his enthusiasm somewhat….

Next up we headed for the rocky landscapes of The Burren, which is a huge national park in the heart of County Clare. We took several stop offs, firstly at a ruined church overlooking a valley, then at a crumbling fortress that was just shutting for the day. Finally, we arrived at the rock formations that made the Burren famous: flat platforms of rock broken with crevices, where plants grew. You could hide two feet from someone in the heart of The Burren and they’d have absolutely no idea you were there. Propped up in the middle of all the rocks is a grave where 32 people are buried, like a tiny rocky hut, over 5000 years old. A really surreal environment, and somewhere I’d absolutely love to go back and spend a couple of nights camping in the future. For the record, my pronunciation of ‘The Burren’ is just as comic as my pronunciation of ‘Moher’. I guess my tongue’s just not designed for Irish.

By the time we got back, we were all totally exhausted (I totally disagree that sea air invigorates, it might wake you up as long as you’re sat in a windy gale, but as soon as you leave you’re out like a baby), but I’ve been meaning to see more of Ireland, and this was a fantastic start.

This weekend, happily, will be a fantastic follow on: Helena has grabbed another internship (amazing in this economy, really, as it’s seriously competitive), and will be working two days a week in Galway and three days a week in Dublin. So before we have to see a little less of each other, we’re heading to Belfast and Giant’s Causeway for the weekend, which should be just as good as Wednesday.