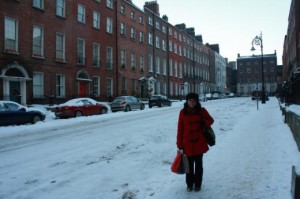 I might as well be honest: I really don’t like Christmas. That’s not to say that I don’t like the day itself: I’m all for overeating, down time and a good bit of boozing, but I find the build up utterly pathetic, and it drives me to the brink of insanity. I found it so difficult doing my Christmas shopping that I seriously considered boycotting the whole thing and just handing some stuff out after the commercial blitz that is the New Year sales was over. I don’t even believe in the entire backdrop to the holiday, and by the time the hype subsides I’ve pretty much lost all interest. Having said that, once the two-month build up (does it really need to get longer every year?) is out of the way, and providing I can avoid excessive stupid jingly music, I actually quite enjoy the event itself. I know, just call me scrooge (Helena prefers Grinch, either works…).

Our Christmas was almost canceled altogether, or at least confined to movies and a nice meal at home. The snow’s been so bad in Ireland over the last few weeks that Helena’s mum’s pipes froze, and they had no water, so we diverted our trip at the last minute and spent the holidays with Helena’s sister, her other half and her two very small children. It actually improves the holiday a whole lot spending it with kids (though it does cut down on the boozing a bit, too); they were very sweet and the older one highly overexcited about her new toys. It’s kind of romantic in the snow, as well, though we were all but housebound. Still, it was sociable and nicely quiet, which is probably how I’d have the holidays given the choice, anyway (aside from being abroad and having the entire thing confined to one good day – worked a lot better for me!). Predictably, I feel like I’ve consumed the better part of an entire large animal, and now need to start the biggest diet/ fitness regime since those marathons a few years back to get myself in the shape for my wedding. Let’s just call it a New Year’s resolution; I’m not quite ready yet. 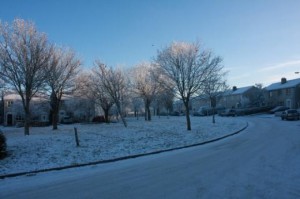 I learnt a couple of interesting Irish Christmas customs. I’m used to a slightly torturous wait until after dinner to open presents on Christmas Day (ok, it’s more the process that’s torturous beyond the age of say 15), but in Ireland, Santa comes in the late afternoon on Christmas Eve, and the presents are all dealt with before bed time. There’s another tradition for Boxing Day (St Stephen’s Day in Ireland), which involves little kids running around the local houses a little like Halloween, but asking for money instead of sweets. There’s a rhyme that goes with it:

“The wren, the wren, the king of all birds,
St. Stephen’s Day was caught in the furze,
Although he was little his honour was great,
Jump up me lads and give us a treat.”

I’ll own up: I just had to look that up on Wikipedia, but we did experience it in the pub watching Villa continue their disastrous season and enjoying some wine.

Obviously I won’t be posting little kiddie pics on here, as this is very public and they’re not mine to post, but I really hope that if Helena and I have children one day, they’re as cute and happy as the ones I spent Christmas with. Now, an end to this commercial insanity, please? Not a chance, sadly. Next year, I might just be somewhere that doesn’t need forty-minute queues in every shop to mark the holidays…