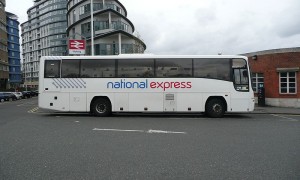 I decided to experiment with National Express going up to London this weekend, partly as it’s cheaper and partly with a view to using them in an article I’m working on about having fun in the recession without blowing the budget. Instead I had one of the worst travel experiences of my life, with incredibly rude bus conductors, massive delays and long journeys in the wrong direction. I wont go in to detail, but I can’t resist putting up the letter I’m about to send them, so you can make up your own mind. It doesn’t hurt to seperate it from what was otherwise a fantastic weekend….

I was unfortunate enough to travel on the 033 National Express service from London Victoria to Salisbury on the evening of the 14th of December 2009, and would like to make you aware of the shambolic nature of the service (though I don’t doubt that I won’t be the first).

On arriving at London Victoria 15 minutes before departure the bus was waiting to be boarded, but instead drove away from the terminal, while the waiting passengers were informed there was a technical problem. I don’t know what it was, but it certainly wasn’t something that prevented the driver from pulling up to Victoria’s (departure only) terminal and waiting until within a few minutes of the proposed departure time. Whatever the problem was, what I would expect to happen next is for the company to source another bus and run the service. I would understand if this wasn’t possible quickly in a small countryside location, but we’re talking about a busy service running from one of the country’s largest hubs, and I find it genuinely hard to believe that a company the size of National Express were unable to provide an alternative coach.

Instead, half an hour after the scheduled departure time, we were bundled onto a different service heading for Totnes and told a new bus would be waiting for us at Heathrow Airport. On arrival at Heathrow Airport there was no bus waiting – I later learnt from a driver that the local staff had mistakenly sent it away without us – and we continued on the Totnes service all the way to a service station just twenty miles east of Bristol, by which time it was already later than the scheduled arrival time. Bristol is more than an hour’s drive North of Salisbury, so by the time I arrived home in Salisbury the total journey time – which should have been two hours 45 minutes– was approaching five and a half hours.

As frustrating as the time delays were – they’re more than enough to prompt me to write this letter – the behaviour of the staff on the original bus really aggravated the situation. Their entire handling of the problem was rude and indifferent to the customers, and caused total confusion. Over the course of the journey the passengers were told at least ten different pieces of information on what was going to happen, delivered in a mumbling voice over the tannoy system that left many of the passengers agitated and one woman in tears. If passengers asked the staff member to repeat information he complained that they were talking and not listening to him, and admonished them like children, Despite being told, he was apparently oblivious to the fact that few understood him clearly amongst the native English speakers, and having visited Heathrow Airport their were also numerous foreign language passengers who had no idea what was going on.

On announcing the problems, the staff were extremely quick to shift blame, while in their more standard patter on seat belts they compared the UK police force to the Gestapo – no doubt a joke, but it certainly offended some German passengers and a number of the natives, too. When the staff eventually revealed how delayed the service would be they accompanied the announcement with the words ‘Oh fffff’ (without completing the word, but the sentiment was clear) in an apparent attempt to sympathise with the passengers, and irritated several parents travelling with small children. At one unscheduled rest stop some passengers wanted to leave the bus after nearly four hours cramped in one space, and were blocked at the doorway by staff and sent back, with the driver saying ‘we told you to stay on the bus, you don’t listen’, again like he was talking to a small child. Not only did the staff on the original bus seriously aggravate an already ludicrous problem, they offended a large number of the passengers and generally behaved in an obnoxious and unhelpful manner throughout. In addition, the original no. 33 service was referred to by at least six different (if similar) numbers over the course of the journey, further confusing the situation.

Unfortunately for National Express – as you will see from my headed paper – I am a freelance travel writer who had intended to write a story recommending National Express as a recession busting way to travel. Instead I have a far more interesting story about the firm’s evident total disregard for its passengers, and I’d very much like to hear National Express’ response to these problems to include in it. Having wasted several hours of my own precious weekend, I’d also like to request that at the very least National Express refund the cost of the trip. I would be utterly amazed if you don’t hear similar complaints from the other passengers on this particular journey in the very near future. Especially given that for many of the passengers Salisbury was not the final destination, and plenty had still further delays in getting back to homes in Andover and Amesbury – an even shorter timetabled journey that in some cases would have ended up being three times its advertised length.

I have previously travelled on bus services around India between tiny ramshackle third world towns that have been able to replace a bus and provide a service more effectively than what I experienced with National Express, a major national carrier. As this was my first experience of your service in more than five years, I have no basis for comparison, but I very much hope that this is not typical. I enclose my ticket for the service, and look forward to your reply,