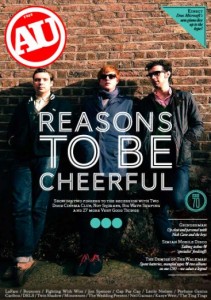 I’ve had this blog stuffed up my sleeve for a while: it seems somehow unethical to blog on time with a band before the associated article’s gone into print. This one was for AU Magazine, who are a Belfast-based authority on Irish (and international) music, and have been following Two Door Cinema Club since right at the beginning. The and originally from Bangor, Northern Ireland, and are now an international force who’ve played to tens of thousands of people in several countries since their debut album came out this year. Oddly, my first article for AU (Alternative Ulster) was in the issue in which they last put Two Door on the cover. This time, though, I was the one writing the story.

If you want to avoid the rambling and cut to the point, the story itself is available here, click through to page 56, or this website here.

I’ve had a few cover stories before (mostly in Korea), but it still feels like something of a landmark. Better still, though, it was a real insight into just what the lifestyle of a big pop-rock band might be. I met the guys at a hotel in Dublin, where we did a photo shoot. The photos include the shot on the cover I’ve attached to this, which was taken by a great Dublin photographer called Lili Forberg, whose currently a contender for Ireland’s most influential photographer. Nice company I get to keep!

The point of the day for me was to get an interesting article, of course, and having the whole day to do it made life a lot easier. I basically asked a load of assorted questions throughout the day, and allowed the band to ramble away as they would normally, noting down a few little interesting quips to add color to it all. For the band, though, it was a promo day, culminating in a ‘live’ (i.e. mimed) appearance on Irish television’s flagship show, ‘The Late Late Show’.

The first three stop off were radio shows. I don’t know why people are still surprised when musicians are just normal people – perhaps they expect big egos – but in traveling from station to station, it quickly became obvious that Two Door are just very typical lads, just with some much better than average stories. The banter’s all about the American tour (which they’re fresh off), and the guys seem to live and breathe their music. They’ve reworked half a dozen of the tracks into beautiful acoustic version for the radio shows (completely different to the album), and watching them play live to just the radio presenter and myself was a pretty special experience. Especially the sarcastic cover of Toto’s ‘Africa’ they do as a warm up. Another really noticeable thing is the quality of Alex’s voice – really special when everything’s toned down so much.

The tour stories revolve around things like coming back to the tour van to find the door covered in girls phone number’s in lipstick (which they claim they immediately gave to the roadies… hmm!), and late night pool parts on hotel rooftops in Australia. It reminds me a little of traveling, except on a much more ‘luxury’ scale.

We dropped in on Phantom FM, which had a really professional set up and a very nice atmosphere, followed by Spin, which was much more confined. Spin also tried their luck in getting a last minute Christmas cover, which for any vaguely trendy band would be a form of career suicide, especially unrehearsed. A good ‘no’, I’d say.

The ‘big one’ was RTE 2FM, though, which came across as by far the most professional set up. RTE is the Irish version of the BBC, a State funded broadcast that represents pretty much the pinnacle of achievement for any local band. As Two Door Cinema Club are from Northern Ireland, though, they’ve never seen any of it, so they seemed pretty laid back about things. The total opposite to their appearance on Joolz Holland a week before, apparently.

The radio thing went well, and the TV appearance – The Late Late Show – was really just a case of doing live vocals over a backing track, the first time the band have ever mimed (they hated doing it). We did a formal interview back stage (mostly the ‘highlights of the year’ bit at the end of the article), and then I watched the band perform ‘live’ on national television from the side of the stage. As we left I had a few people ask me to sign stuff, assuming I was in the band, which was a little odd, seeing as they were all holding guitars or drumsticks… I was tempted to just scribble, but I pointed them in the right directions.

Another guest on the day was Dawn French, who was extremely friendly – she always comes across really well, and came charging out of her room at a speed that seemed unreasonable for a woman of her size to say hello as we walked back to the dressing room. Straight after the show, the band headed back to Belfast, though we did have a few beers after their Dublin show a week or so ago.

The most important aspect of it all for me, of course, was getting the cover story down well. I’ll let you be the judge on whether I did that (the cover story is linked above, for those with short term memory problems!). A great experience all round, though. I wouldn’t mind a few more trips into the heart of the Dublin music and entertainment industry.