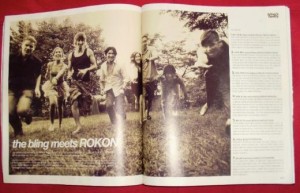 Bling (or, to give its a full title, the wonderfully Konglish the Bling) ran a profile of all of us new writers who moved over from Rokon this month. The English content stuff wont begin until next month (it looks like the first ever English content feature article will be my interview piece about Pendulum!), but the magazine wanted to introduce us to the readers. As a result the August issue has a picture of seven of us charging towards the camera (from the photo shoot about three weeks ago) along with a short piece introducing each person. Weird, but very exciting! Mine says:

Which more than likely makes even less sense to you than it does to me, so heres a translation some friends helped me out with:

Julian, the publisher of Rokon, said that James is a genius. He has been in Korea for about 15 months and has a great talent in writing. James, born in Salisbury, England, flew to Korea right after his graduation (actually I didnt, but Ill live!). He expressed his ambition, to become a magazine writer, saying that he wants to continue writing in the future. He is going to show his brilliant ability at writing and reporting to us all through .

Very cool! I cant wait for the first article to come out next month. Continuing to write for Bling after I move to Ireland is looking extremely likely too, which will be great. Im hyped, I could get used to being called a genius in print!