One of the first things I learnt on my escapades into professional writing was – as far as possible – write about what you know and love. There can’t be anything that falls into that category more than my little family. I wish I could find the time to write more about Adam’s early days. It’s an unfortunate but hard to avoid side effect of having a little man: plenty of really exciting things going on, things that deserve to be documented if only for my own latent sense of nostalgia, but no time to get them all down on ‘paper’ to look back on. It goes without saying that the mini dude’s arrival changes life hugely: it’s exhausting, pretty intense but never less than wonderful. At the risk of being one of those fawning parents who’s developed a one track mind (guilty, to an extent), I can’t help sticking down a few of the very best times:

I’m not sure there’s anything that can make you see your partner more perfectly than being there through the process of a birth. Adam’s was sometimes difficult, sometimes a pleasure (easy for me to say, I know), and sometimes flat out surreal. Take the traditional mad rush to the hospital. Helena called my office to let me know her waters had broken (she was bouncing on a rubber ball trying to induce them at the time, but she was a day short of a forced induction – nine days overdue – so that kind of behavior was more than necessary), and I made the maddest of mad sprints across the city on my bike, breaking red lights all over the place just like the local cyclists I’m prone to whinge about. I was home twelve minutes after taking the call, during which I’m pretty sure I said nothing more than ‘I’m coming’.

Then we go to the hospital, and they didn’t believe Helena’s waters had broken.

They were wrong, of course, but it had the really odd side-effect of meaning we spent an hour of Helena’s labour shoe shopping and eating – of all things – a burger in McDonalds. Once we were admitted, the labour was a long, protracted experience during which the ability to make small talk about Gaelic Football with maternity nurses was tested to the limit (they’re outstanding, by the way) and eventually realized the little man wasn’t going to come out of his own volition.

So an emergency caesarean at just after midnight on the 23rd of August it was, a scary one at that. Holding Helena’s hand while I could see her being cut open around a flimsy sheet and trying to smile was tough. Once Adam popped out, started crying and was taken over to an incubator, I didn’t know whether to stay with Helena or run to the little man. I ended up as a hopeless kind of middle ground, tearful and scared. Helena lost a lot of blood. I was sent from the room clutching the tiniest baby I’ve ever held, and ignoring a shock-resistant tea. I next saw Helena nearly an hour later, under an anti-shock hear blanket and desperate for some time with her baby. Perhaps the weirdest side of it all is the mundane sides: the need to top up the car park meter every few hours. The hazy journey home (there should probably be laws against new fathers driving), the point where it becomes essential to sneak out and eat. Life changes completely, but somehow is just the same, too. 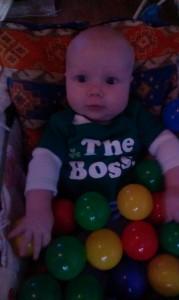 Adam was a big baby at 8lbs 5ozs, but newborns are just so delicate. It didn’t last long; he’s a burly little thing now, but at that stage you almost feel the need to check he’s okay every hour or so, even when he’s sleeping. I was in the hospital 12 hours a day for the first three days, before we got home, but I still missed a story I have a feeling we’ll be telling him one day. Adam became the crying ringleader of a big ward full of babies, and eventually had to be escorted out of the room by the nurses and calmed down – Helena was still bed-bound so couldn’t do much herself – and after five minutes she rang the medical emergency bell and demanded her baby back. It’s a soppy cliche, but we’ve spent hours staring at the little dude. It’s amazing how quickly he’s changed.

I’m sure they’ll come a time when I’ll regret this, but changing nappies is incredibly fun. I’m not being sarcastic: Adam’s at his most playful when you put him on a changing mat, mess around with his clothes and make him feel more comfortable. He giggles, wriggles, makes adorable little noises and looks at you like his savior. I genuinely love it, though I hear it gets worse when his diet doesn’t just consist of milk. Of course, every rule needs its exception:

There has to be a name for these things. We trialed the poonami and the poonada, but ultimately the poopocalypse just sounds best. Fact: nappies don’t always do what they’re supposed to. In fact, babies ability to direct things out of the top of the things in a way that makes absolutely no sense to all known physics. Cue complete change of clothes, the use of half a packet of baby wipes and sometimes a bath in a saucepan. Which ultimately is just adorable. Someone even made a video about it…

Light… and then TV.

Babies love lights. Something to do with the way their eyes work, I think, but it really is a complete fascination, and recently it’s stretched to television, too. Babies aren’t really supposed to watch television, which means either having the thing turned off all the time, or facing Adam in the other direction. He’s become incredibly adept at twisting himself round on shoulders so he can see whatever flickering’s going on. 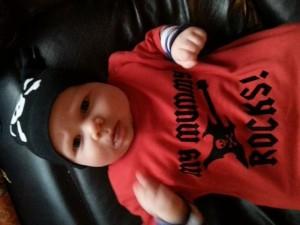 Ever since he was born, Adam’s seemed to have done a host of little animal impressions. I know it’s one of those things that only parents would ever notice, but we have fun with it. Just after birth, when he was still in the hospital he did a great mole impression, his eyes all scrunched up against the light with his little wrinkly face. He went through a phase of making noises exactly like a dolphin before he could manage anything louder (crying aside, obviously), and now he does a great seal impression with his whole body swoop when he wants to feed. Awesome.

Again, knowing full well I’m in fawning parent mode, this man can smile like a champion. There are a few different things that get him going – he’s totally fascinated by spinning lights and colours, and has a real fixation with having moisturizer rubbed on his face. Bath time is certain to bring smiles and a cry or two all within two or three minutes, and general playing around with lots of toys quickly perks the little man up, too. He seems incredibly responsive to us for this age,but I guess that’s in part because we only remember when he’s doing things, and not the time most people are more likely to see (sleep). But he’s pure concentrated wonderful.