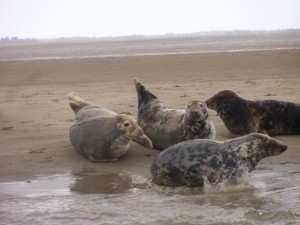 Wow, Wexford is quiet. We took a train straight from work into town, arriving at about 8pm in the evening, and expecting the place to have a little bit of a buzz to it (Irish towns generally do on a Friday night), and could barely find a person on the entire main street. It is, though, a really quaint place.

We stayed the weekend in a B+B that was also a castle, just outside the city centre. In truth, it felt a little like staying in an old people’s home in the bedrooms, but they did do an amazing breakfast with fresh scones, and you could clamber around the rafters of the old castle, or walk around the gardens, which is a great change from Dublin.

We actually found precious little to do in Wexford, but what there is was great. The quality of food was incredible – pricier than Dublin, oddly, and clearly pitched at tourists – but really impressively interesting. I could have walked around the restaurants and just stuffed myself for the entire summer, but I’ve done far too much of that already this summer at festivals. The main sights seem to be the seafront promenade (where we saw a man doing religious graffiti – one seriously odd mix) and Selskar, which is quite an impressive abbey in the centre of the city but entirely locked up, so you can only stare at it through the gate.

We spent most of the Saturday shopping, which basically involved creating a large pile of shoes in the centre of Dunnes (an incident that’s been branded ‘shoepocalypse’ (there’s probably a reason I don’t do a lot of shopping) and hopping in and out of coffee shops. There’s also a tiny little market stall run by ditsy people selling second hand books and prints of pictures at a price that they couldn’t possibly be making a living out of, which gives an impressive quaint feel. 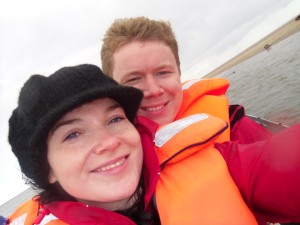 The highlight of the trip was definitely a Sunday morning boat trip. There’s a speedboat that leaves from Wexford harbour and heads out to explore the nearby bay, the main selling point of which is a huge number of seals. They all sit out on a sandbank, and when the boat comes near, they begin to scatter and bounce across the beach. There must be a couple of hundred, from two metre monsters to little babies that don’t seem to want to move more than a few feet from their mothers. The really big ones are so fat that they really struggle to move on the beach, but once they get in the water they’re really graceful, and keep popping their heads up just above the surface to check where the boat is, sometimes just a few feet from it.

There’s another part to the boat trip, too – the South African captain whips it around and around in a circle until the waves get really choppy, to simulate ‘real seas’, and then lets the boat bump around amongst it all. On the way home we dropped in on a town that used to sit on the far side of Wexford harbour, but is now nothing more than a few concrete remains sticking out of the water at low tide. We only got a little wet, too.

Wexford’s really scenic, as is the train ride down, but I’m not sure I’d want to spend more than a weekend or two there, as there’s just not enough to do. It did make a much-needed break from the endless stream of summer festivals.

Check out some seal pictures while you’re here!