Crossing the 38th parallel in the early hours of the morning gives you a similar feeling to stepping back in time. Through the misty landscape you can make out guards from both sides of the divide stood to attention in dark glasses, their heads rocking slowly from side to side, scanning the landscape and keeping a close eye on the passing tour buses. The democractic South is fading out of view behind, it’s convenient and fast paced lifestyle replaced over the course of just two miles by the simple life: an animalistic struggle for survival within a rigid, heavily-enforced political structure. It’s so different you could equally have just teleported to the moon.

Arriving in the North, we have our faux-passports stamped in a luxurious immigration hall (real passports are not used in the North for fear of other countries denying access to visitors when they see the immigration stamp: tourists are an essential source of income in the North, they’re careful not to put them off) and hop back on the bus for a 45 minute drive to our first destination. All eyes are on the windows: photos are strictly forbidden in all but the most controlled environments here, so every small aspect of North Korean life must be checked-out and commited to memory on the journey. The first thing we notice is the lack of trees: every available space is used for farmland. A North Korean tour guide has joined us, and afforms us in an oddly proud way that all the trees have been burnt. Fuel is always needed due to the frequent long power cuts. Every inch of even the steepest hill has been terraced and turned into a source of food: if you’re lucky, life here is hand to mouth. The less lucky simply starve. 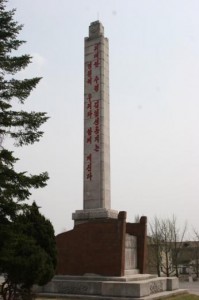 Our North korean guide regales us with ‘Arirang’ folk songs: the Arirang games will start next week, and the whole country is in the mood to celebrate. The games are North Korea’s olympics, only more elaborate in symbolic in nature. They’re intended as a chance for locals to dedicate themselves to the cause; only the most commited of Communists gets to take part, and should consider this a great honour. Our guide is clearly getting in the spirit of it. We pass through the Gaesong industrial complex: a rare example of North/South cooperation, and the source of recent controversery when a large number of South Korean managers were expelled from the site in a threatening move by the North. It’s a rare glimpse at capitalism in the North: names like Hyundai; SK Telecom and GS adorn the buildings, though far more subtley then they ever would back in Seoul. Throughout the ride we are never out of the direct eyeline of at least two rigid and smartly dressed soliders. It is strictly forbidden to photograph them, and recommeded to ignore them. As we pass by we can see each soldier report our progress on to the next by walkie-talkie.

Eventually in we arrive at Barkyeon waterfall, a beautifully constructed pool terrace at the base of a natural waterfall, with a pathway leading up to a number of small temples. We can’t help feeling a little douped: we are finally given free reign over our cameras, and the site has clearly been designed to portray North Korea in a ridiculously unrealistic light. None the less we are treated to some impressive propoganda: there are a number of large scale signs proclaiming the beauty of Communism, and wishing the longest possible life to (long dead) former leader Kim Il Sung. The temples are a surreal experience; similar to their South Korean counterparts in style, though often adorned with references to the dear leaders and receiving far more regular licks of paint. Even in amongst the temples there are numerous small areas of farm land, an indication, perhaps, of just how bad the food supply problem in this country is. We start to notice some strange things: some of the ‘guests’ (they also have faux-passports displayed around their necks) have earphones and mouth pieces strapped in place below their baseball caps: everyones cell phones were taken away at the border. A small Kim Jong Il pin on each of their lapels confirms our intial impression, we are being observed by the secret police. It doesn’t matter, no-one feels like talking politics. 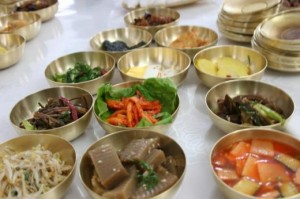 At the top of the trail there is a temple, perhaps the only place in Asia where it is acceptable to photograph the inside of a Buddhist building. Religion is stricly banned in North Korea, the buildings are maintained only as a tourist attraction and not considered sacred. Alongside the temple people drink from freshwater springs flowing down bamboo shoots from the mountains and concentrate carefully on exactly where their camera lens is pointing: to point it at the surrounding farmland means an immedaite $10 penalty regardless of whether a photo is even taken. We make the most of the available photo opportunites and move back to our small train of tour buses.

The rest of the trip is spent in Gaesong City itself, a fomer capital of (then unified) Korea and the most contact we’ll be allowed with real life here. We start with lunch, which consists of a table full of ‘side dishes’ that – mixed with a sticky, grainy looking rice – make up our meal. The meal is started with a shot of Soju, as is customary for every meal North of the border. It’s also stronger than the Southern version, and tastes a little like watered down vodka. As well as the inevitable numerous varieties of Kimchi the meal includes Beef, Fish and Chicken. We can’t help feeling we’re not being given a typical local dish: an estimated 2-3 million people starved to death in this region in the past twenty years. They certainly weren’t eating abundant quantities of high quality meat. We sample the local beer, which is warm (probably because of the constant power cuts) and tastes stronger than the Americanised equivalent in the South – similar to Ale back home in England.

After the meal we’re given a rare opportunity: we can step outside into a strictly controlled area of the city centre and snap away at will. There are only two conditions: the photographs should not include local citizens, and we’re not allowed to photograph the ugly buildings the other side of the road. In other words photographs taken here will portray the small number of beautiful city centre buildings and avoid featuring the bedraggled looking local population in make-do outfits, or the towering rusty cranes and crumbling buildings that surround them. It’s better than nothing: the option to take any photographs at all here only became available two days ago.

The remainder of the day is more of the same, a procession of historical tourist sites relating to ancient events that the Korean visitors are far more enthused by then us. These include a bridge where one of the future Kings supporters was slayed for not supporting the King of the time. Blood stains can still be seen on the rock, and local legend says that the blood was so thick with loyalty and goodness that Bamboo shoots soon grew from the spots where it was spilt. Nearby there is a small temple paying homage to the victims of this ancient revolution where it is said to be lucky to stroke the head of one of the two large turtle statues. The lucky one, inevitably, is the Northern one of the two.

At some sites we are able to grab a quick glimpse of local life. We see people walk around with a curious and purposeful gait – as well as a host of ‘blocky’ soviet buildings – before being ushered away from the views by the tour guides. Public buildings are an exact opposite to the rampant over-advertising in the South: North Korean buildings feature only a small sign and picture indicating what they contain, as well as a large obligatory sign painted in red and white. The sign speaks of communism, thanks Kim Jong Il or Kim Il Sung or wishes Kim Jong Il a long and happy life. At the museum we can see locals farming in amongst the graves nextdoor. At a Confusianist education centre the original walls have clearly been extended to prevent a good view of the surroundings.

All in all it’s a unbelievably carefully monitored experience designed to portray the Communist North as a happy go lucky place, but failing in almost every way to do so. I wish I could have photographed everything I saw, as the photos I have – as interesting as they are – simply don’t tell anything like the whole story. Before leaving we had one last special opportunity: a bit of Communist shopping. This must be the ultimate in contradictory concepts, but the country clearly needs the money and the tourist dollar (literally, no foreign is allowed to touch the local currency, so the dollar is widely used in Gaesong’s sites). Our guides advise us that most of what we can buy is illegal in the South, where there are still very strict anti-Communist laws. On enquiring what the consequences would be should I be caught with the materials at the border, however, she admits that they’ll simply be taken away. For the princely sum of around $20 I now have a small library on history from the point of view of North Korea (fascinating bed time reading no doubt!), several bottles of North Korean Liquor and a collection of unusual propoganda stamps: together perhaps my proudest pieces of tourist memrobilia yet.

A day in North Korea is only enough to get the briefest sense of real life over here, and Gaesong is clearly doctored to be well above average, but this was a thrilling glance none the less. Sites open and close all the time according to the relationship between the two countries, so in a few months I may well be back. For now I’ll have to be content with the memories and the Kim Jong Il approved book ‘US – The Empire of Terrorism’. Fun? Fun isn’t the word, but as a travel experience this was totally untouchable.