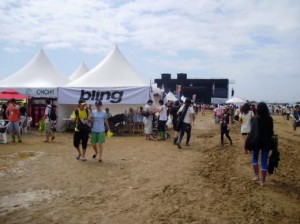 Summer just wouldnt be summer without two days in the mud dancing in front of a large open-air stage. Preferably in a field in Somerset, but when Somerset is half the world away you have to compromise. Pentaport, as it turns out, is not a bad compromise. Firstly, the festival seems to have developed a unique ability to draw in a wide selection of British bands. Whilst this does, inevitably, leave are small British contingent jumping around like fools whilst the rest of the crowd look on in confused non-compliance, it does feel a little like returning home for the weekend.

Then there was the mud. The rain came down in bucket throughout Friday and Saturday morning. I was stuck working until early Saturday afternoon, so by the time we arrived the festival site vaguely resembled the Somme after a particularly hard fought troop advance. They did do an excellent job of getting rid of most of the standing water by Sunday morning, so we only had to endure one day of wading and flicking mud into the hair. Besides, its all part of the experience.

A Korean festival audience are quite odd. Theres a definite hint of go with the flow to them  theres often a lot of passionless, going-through-the-motions- jumping up and down that creates next to no atmosphere. When it does get going, theres an element of synchronicity to the audiences actions, which comes across as particularly weird at a festival celebrating a genre that is supposed to reject conformity. The audience have a very young demographic, and only the most dramatic of on stage moments seems to provoke any real atmosphere.

From my point of view, however, the whole thing felt like a celebration of my writing success so far. My new magazine gave me free tickets, and when I turned up at their on festival tent, presented me with a copy of the new magazine (in which there is a picture of all of the old Rokon writers along with quotes  see separate entry) and a bottle of orange vodka. Nice. The magazines size and influence is really impressive: they had there own stall in a prime position, banner advertising all over the festival site and a televised advert playing on heavy rotation on the screens beside the stage. Mark, Colin, Kristen and Tak – who I spent Saturday with  were pretty impressed I think, though the vodka certainly did its damage towards the end of the day.

Crawling back to the site on Sunday was a bit of a mission too, but well worth the hassle. Sunday was all about the music. Heres what we checked out:

The Vines  (UK) The Vines acted like Oasis for the majority of their set: unless you actually are Oasis thats a pretty difficult thing to get away with. Having said that  at least at the end  they were pretty good. Get Free and Ride got everyone jumping, as did the Miss Jackson cover. Predictable right up until the smashed the stage to pieces during the final song, but not a bad festival opener for us.

문샤인엘스(The Moonshiners)  (Kr) These guys are infamous around Seoul for their dress code, which is a kind of Elvis themed matching suits with slicked-back haircuts. Today was a bright blue suit with white shirt and red tie. They look totally ridiculous, but they can definitely pull out a tune or two.

The Gossip  (US) Very hyped, in my opinion very overrated. They came out of the blocks very fast, extremely impressive first tune, and the Dawn French look-a-like lead singer has a great voice. She rang out of energy after about three songs, however, and from then on they were dire.

Travis  (UK) Ive loved these guys since I was about 15, and never heard them play more than a song or two are Top of the Pops. Theyre looking very old now (the lead singer could pass for 50), but still extremely tight and dont seem to have got bored of it at all. Whilst I cant see them producing anything else of note, this performance was pretty impressive, and spanned a whole decades worth of stuff from All I wanna Do Is Rock right up to some droning new stuff. In the middle of it all was Flowers in the Window, Sing, Driftwood and Why Does It Always Rain On Me? I felt 15 again, though that may have been the vodka. Awesome!

Ozomalti  (US) These guys are surprisingly big in Seoul (they sold out a gig at $80 a ticket earlier this year) and is easy to see why. Their music is lively hippy stuff that pretty much transcends languages, and they put up quite an on stage show. Not really my kind of thing, but I can see what the fuss is about.

가락시 익스프레스 (Galaxy Express)  (Kr) I love these guys. A central part of the Seoul indie circuit, this Pentaport gig was their big break and they certainly made a big thing of it. Its pretty much standard rock stuff, but theyre on stage antics are extremely lively and they whip the young audience into a leaping frenzy down the front. Still just a club band, but that wont last long.

Hard Fi  (UK) Disappointing. They have a good selection of songs, but they seem to lose their power live. Just too mellow. Everyone apart from the lead singer seems just to be along for the ride as well. He almost makes up for it, but not quite. In his shoes Id be firing the rest of the band and getting someone with more punch and personality to back him up. Shame, cos theyre great on CD.

데리스파이스 (Deli Spice)  (Kr) The most famous Korean band to play apart from Crying Nut on Friday, they were such a smattering of assorted genres its really hard to pin down whether theyre any good or not. Through all the eclecticism there were a few beautiful shining lights and an equal number of pieces of throwaway trash. The locals loved them, I found myself jumping up and sitting down as each song went by.

Kasabian  (UK) Brilliant. Every time I see this band they get better, and from the very first beats they had the Pentaport crowd leaping around in front of the stage like theyve never heard a guitar before. This was totally out of control; the best live set Ive seen since Muse played this festival last year. Even worth moshing bare-foot too, which has been causing me balance problems all week. It was worth it. Kasabian are known for their intensity, and tendency to play through a whole set without pausing for breath. Half way through this the leader singer stopped his band, walked to the front of the stage looking stunned and said Im gonna have to take a breather. I just wasnt ready for this. Weve never been here before and we thought wed be playing to half a dozen people. This is insane. Slow down or Im gonna have a heart attack Korea love Kasabian. Too right!

Feeder  (UK) Feeder are such a consistent live act that its almost true that if youve seen them once, youve seen them a thousand times. I make this my seventh, and nothing much had changed: solid, full of catchy hits, but just lacking that something that would push them on to being really great. Theyre still a great festival band, but a bit too same-same to make a big fuss about anymore. Shame, cos they used to be wonderful.

Underworld  (UK) I was hoping these guys would be the kind of lively stage act the Prodigy whipped up last time I saw them. Not a bit of it, theyre the kind of bland generic dance that would require being in a seriously inebriated state to enjoy. We werent, so we went home.

Great weekend all in. Ive really missed music festivals, and to go to on where I felt so much a part of it was wonderful. Loving how many British bands Pentaport manages to pull in every year.