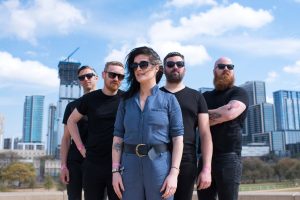 Dublin’s most popular dance act might have left behind the world of major labels, but with the addition of former Fight Like Apes vocalist Mary-Kate Geraghty to the band, an international-class distance runner on drums and an absolutely pulsating live show, they remain the act to be watching at Midnight (Midnight)

Few acts are quite like Le Galaxie. Locally notorious for their late-night festival shows, glowstick showers, shiny stage outfits and thumping dance-pop beats, they’ve evolved where their peers have stagnated. With the addition of an Irish music legend in Mary-Kate Geraghty, have the potential to push the boundaries a whole lot further, despite saying goodbye to major label Universal after just one album.

Their sound is euphoric: bleepy and charmingly sing-along, lively and driving. They bounce across the stage, blazing through tracks as if impressing at any individual show is the criteria for ever getting to do another. They’ve established a phenomenal depth of local loyalty in Dublin, in part thanks to the constant, lively evolution. It’s personified this time around in Geraghty.

“The decision to bring Maykay [Geraghty] in full time came in the middle of our sessions with the producer on this album,” frontman Michael Pope says of the band’s new addition. “She was doing vocals already, and came in during the latter third in more of a songwriting kind of way. We should have done it a year earlier, really.”

“It was like a movie. I kept it really cool in the office when they asked me, and then got outside and flipped, I was like ‘yippee’” Geraghty jokes. “Before that, I’d been doing at least one song a show with them for a while, but it’s bizarrely frustrating to go out, go crazy for three minutes and then come off.”

“We’d started to bring her on for more songs live, to do Love System and a couple of new songs” Pope continues. “The dynamic of her being on stage is like a bolt of lightning. It doesn’t detract at all from when she’s not on stage. We still have that balance. It isn’t all about myself and Mary, call and response or anything like that. It’s still about the band and what they’re doing, the vibe on stage. If anything, it’s become more dynamic, more intense, more joyous.”

“On every song, my role is different,” Geraghty adds. “There are a couple of songs now I get to do lead on. Then there’s duets, and there’s call and response. There won’t be changes to the old tracks to fit me in, though. As times goes on we might try and fit me into the female parts of more of the songs.”