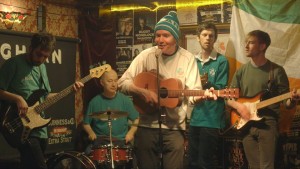 Last month, I put together an article for Bandcamp on the Euros and music, which was a whole lot of fun, and is due to run in another week or so. For that article, I interviewed ten different acts from all around Europe on their take on football, the story behind their songs and a few other things about France 2016. One particular interview stood out, so rather than take just the best few lines from it and leave things at that, I thought I’d throw it up here. Here’s Andy Wilson and the Longshots talking about Ireland and ‘Summer of ’16’

I wrote the song immediately after we qualified. We qualified on the Monday night after the Paris attacks, so I suppose emotions were running high. By Tuesday night, I had most of it written and finished it within the week. I had loads more verses, for example the topical easter verse‘ In the easter of ’16, we rebelled against the queen, well actually it was a king, but that doesn’t rhyme with green’. But I managed to shape it into what it is now. It comes from my love of the songs that were around in the early 90s. Liam Harrison’s give it a lash Jack. Joxer goes to Stuttgart by Christy Moore. It’s not the same now, the game has changed, Ireland has changed. There hasn’t been a decent one for a while. ill Thraps were good in 2012 with ‘We All Get Nil Together’. Shows how optimistic we were then. There’s a slightly stronger sense of optimism this year. I thought I’d at least have a go. I was laughing out loud while writing it.

I sat on it for months though, wondering what to do with it. Almost forgot about it really. I sang it for a friend, Chris, before Christmas, who absolutely loved it and kept asking me when I was gonna record it. By March he was really starting to get on my case. He gave me a ticket to the opening Cork City game of the season and we went as neutrals (he’s from Wexford, me a UCD fan from Dublin). After the game, we’d had a few pints and there was the opportunity to play a song in the pub (the beer garden in Turner’s cross, where I very rarely have a pint). After 4 or 5 pints I find it difficult to not seize such an opportunity. It steadies me! So I told Chris I’d play it, got up, and did it. The reaction was fairly shocking. Everyone loved it.

I’d watched the draw in my local, Coughlan’s, where I’d watched us qualify and where we made the video. It’s more of a rugby pub than a soccer pub, so there wasn’t a huge interest in the draw. As i sat at the bar I felt like the only one who cared, until in came Ray and Geraldine Barron, husband and wife, professional musicians and very nice people. While we sat at the bar watching a difficult draw transpire, I lightened the mood by reciting the verses I could remember from my song and it helped us settle the nerves. I’d done a little recording with Ray before and really enjoyed working with him, so, months after sharing those nervous moments in Coughlan’s, filled with confidence that the song was worth putting down, I called Ray and asked if he’d help me out.