Dublin’s seminal punk band Paranoid Visions have been kicking up a riot of political protest and social commentary for just about three decades now. Being almost as old as punk itself, though, has done nothing to tame their furious instincts, fuelled in 2012 by austerity measures, unemployment issues and a sense that their long-standing criticism of the Irish political system has finally been born out. The band is prolific; up and coming album Escape From Austerity Complex will continue their flow of at least an album per year since their reformation seven years ago.

Escape From Austerity Complex isn’t due until early September, but on visiting Paranoid Visions in the studio to talk over their take on modern Ireland, and just where they fit in, guitarist Peter Jones kindly handed us a full pre-mix version of the record. Here, then, is the very first preview of an album that – through cutting, snarling vocalist Deko Dachau – is very much an angry voice for today:

‘Tainted Ink’
A slightly tinny track, with a jarring electro opening and a slow building vocal. ‘Tainted Ink’ is announced and then snarled through by an increasing irate Deko, backed up by toned-down minor key vocals. Tainted Ink is a track on dishonestly and volatility, building to a bitter closing crescendo. It’s musically refrained next to some earlier efforts, yet snarling and aggressive lyrically, making the perfect bitter, recession-themed opener.

‘(Join The) Recession Klub’
Not a new track (‘Recession Klub’ featured on the Der Election EP in early 2011), is a scathing attack on Irish politics with a memorable refrain from an embittered Deko, who repeats ‘Join The Recession Club’ between hostile lyrics. The verses are more noteworthy, though, with lines like “but still they tell us they’ve got it right, and all we get is a higher price, and still they tell us that they know best as they cripple us with debt”. Then they get to the IMF “they’re mortgaging our future and I barely hear a shout”. A poignant ode to political indifference if ever we heard one; the stark guitars and slow-punk vibe fit nicely, too. At nearly ten minutes it labours the point, but it’s a point well worth labouring.

‘All Systems Go’
“You’ve got to get mad. You’ve got to say ‘I’m a human being God damn it, my life has value”. A wonderfully instructional opening spoken-word segment overlaid with siren-esque blare gives way to some crashing drums. This track’s about the domination of a rich minority, a ‘democratic’ (dictated) rut; another stab at the system. There’s an intelligent downtrodden angle slamming the way the country is, through vocals that weave in and out of each other, the stark siren edge dominant throughout. The message ‘support every revolution’ is a thought-provoking refrain; the message never in doubt.

‘Outsider Artist’
The title track from 2011’s EP, Outsider Artist is given a going over. There aren’t huge changes, with the core of the song being a less serious take on Paranoid Visions’ objectives: Deko describes himself as talentless (agree with him or not, you’d be hard press to say the man isn’t quite the urban poet), but the centre is all about the punk rock ethos: “this is why I came to punk, this is why my life is fun, I stand out here amongst the crowd, hear me laugh out loud”. The Arabic-inspired instrumental towards the end is top class, too.

‘Beatenhovan’s Symphony’
This is a tough one to pick the bones out of, washing over in a riot of colourful catchphrases that lose the message somewhat. It’s a great mess of a punk track, which is probably exactly what they were going for, but lacks the same thought-provoking angle as some other tracks, simply because the message takes some extracting. A slow burner, perhaps. 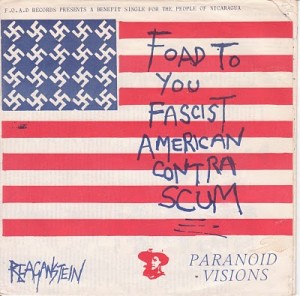 ‘On The Run’
“Don’t believe the history, it’s manufactured fallacy”. Another poignant stab at the way the world is run, which portrays the leadership as thieves, a viewpoint that will sit well after the Mahon report. Simultaneously proclaiming their own sanity and slamming the way the nation is run, ‘On The Run’ hits its highs when the backing singers set upon the futility of arguing with power, screeching “still we play these futile games”. Perhaps the darkest track on the album, it’s also one of the heaviest, focusing on battering guitar and growling vocals from Deko.

‘Poles Apart’
Deko proclaims “The seas are shifting” half way through this song, and seems to suddenly launch into a hopeful aside. It doesn’t last long – “the road to hell is human” quickly puts a darker twist on things – but this rumbles along, with a subtler guitar line and a depth that comes from picking out the twists and turns in the fast-flowing vocals. Another track that’s going to offer a slightly different angle for at least the first few listens.

‘Don’t Let The Rot Set In’
A Paranoid Visions track starting with the sound of birds chirping? This soon turns into a brutal examination of Ireland’s race problems, opening with the spoken lines “Ireland for the Irish and for anyone in need, our Irish hospitality for all the refugees, and if you come to Ireland, you may follow your own creed, but you can’t denounce our culture, our religion, or our freedom.” In interview, Deko and Peter Jones talked of their disbelief in a representative flag, and as this kicks into a screeching ‘freedom’, they proceed to hammer home the point. The key line here is revisited time and again– “when in Rome, as the old saying goes, do as Romans do, but what the hell would Romans do if they were being abused?”.

‘Politician 2011′
An update on an old classic, ‘Politician 2011′ is perhaps the most ‘rock’ track on the album, featuring slurring guitars and the pointed refrain “the other half live, the other half lives with him”. “Stuff your policies” and attacks on political dignity will certainly sit well today. The first version of this appeared on ‘Der Elektion’, which caused controversy when its front cover was pasted around town, featuring Brian Cowen’s face with a target hovering over it. While few would advocate the actual shooting, of course, the image might well find more popular support these days.

‘Dangerous Rhythms’
“We have the right to revolution to make our country home…. Liberate your state, your fucking nation.” This is a call for political upheaval that sounds like a siren across the album, summing up the anger of the lyrical content. It has a softer side, too, moving on to the healing of years of hurt in a quick-fire, embittered song that sums up Paranoid Visions entire ethos.

‘Statement’
“Who’s in control?” Clearly, Paranoid Visions doubt that the government are, perhaps eyeing Europe instead. The early-track repetition about history repeating itself hits home; this is a fantastically disconnected song, seeming to go through several wacky interludes held together by a persistent, hollow drum beat. It’s a stinging attack on corruption and educational values, taking a stab at the church’s influence in Ireland, too, and hitting a harrowing high in the screams of “the future must come” mid track. An atypical Paranoid Visions song, but this could well be one of their best.

All tracks are still in production, and so may not accurately represent the final versions; the track listing above is also incomplete, with several additional tracks expected to be added at a later date. Paranoid Visions are also currently completing a summer-release 7” single featuring their hero, Crass Vocalist Steve Ignorant guesting on lead vocals, and play ‘Out Of Control’ festival in Belfast in late June.