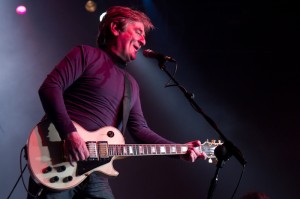 Tonight’s support act, The 123Fours, are a comedy punk band, so we’re told. Disappointingly, it turns out what that really means is comedians (namely Dermot Whelan, Colin Murphy, John Colleary and Jackie Hamilton) playing almost-punk: there’s very little funny about this outfit aside from their quirky tagline, a reference to every track opening with that punk-rock mainstay “one, two, three, four”. It’s a tired cliché, and while they’re musically adept – possibly too much so – there’s little about the 123Fours that justifies their status on a stage as big as the Olympia’s. Genuine punk is far less smooth and predictable, and while covers of The Ramones, The Clash and The Buzzcocks are all very well in their place, one of Dublin’s most prestigious venues isn’t it.

Fortunately, the same certainly doesn’t apply to headliners The Saw Doctors. While they could also be accused of being a tired formula of Irish-dom (or, as their support act point out, purveyors of the all-out culchie fest – and by the audience themselves admission, they’re not wrong), they perform with the same heart that propelled them to Irish stardom two decades ago. That blend of trad, country, nationalist lyrics and a nice pop-rock edge certainly aren’t edgy enough to justify the comedy mini-Mohicans and devil-sign throwing coming from of a couple of lads in the front rows, but The Saw Doctors, not least in the Where’s Wally-ish get up of the ever-charismatic Leo Moran, are still a top, driving live act. 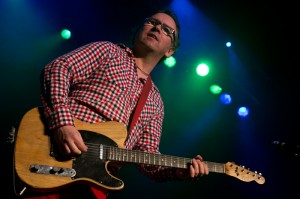 The highlights tonight are predictable, but none the worse for it. The aching refrain of ‘To Win Just Once’ is blown away by more soulful hits like west-coast anthems ‘N17’ and ‘The Green and Red Of Mayo’. It’s all offset only by another quick dabble in cover-land, the frankly cheese-tastically dreadful cover of Petula Clark’s ‘Downtown’ that saw the band compete for last year’s Christmas number one. ‘Michael D Rockin’ In The Dail’ – a hilarious ode to perhaps the only unanimously popular politician in Ireland in the current era – has been updated with a quip about his new-found presidential status, just another playful aside in a set dotted with loveable hits, occasional misses, and, most importantly of all, charisma their contemporaries should rightly be envious of.

In fact, there’s a surprising edge to The Saw Doctor’s music live. Davy Carton’s tendency to chuckle mid-lyric shows just how much they’re still enjoying things, and Anto Thistlethwaite’s bass/ saxophone performance is among the most accomplished we’ve come across in years of gigging; a genuinely outstanding musician. There are moments, like the seemingly unintended comedy chorus line of ‘That’s What She Said Last Night’, when it’s a toss-up between jesting and sheer ridiculousness. The rest of the time, though, a set that comfortably surpasses two hours exudes class.

If I’m being brutally honest, the – probably unintended – elements of small-town Irish sentimentalism do reek a little of ye aulde Ireland cliché for me, and I can’t foresee a time when I’d personally want to sit down and listen to The Saw Doctors on record. That’s not to say there’s anything wrong with them, simply that they fall far from my usual taste in music, and as clearly adept as the song writing is, even a performance like tonight’s is a million miles from moving them up my playlist. All in all, though, the fact that they can overcome my natural aversion to the style and get me dancing along with their commuting fan base for the night says everything you need to know about The Saw Doctors as a live act. They’re compelling despite, as much as because of, those tired old-world leanings. Selling yourselves so strongly to a previously indifferent onlooker is a sign of quality in itself.

As published on Goldenplec.com, January 2012. Photos by Kieran Frost.