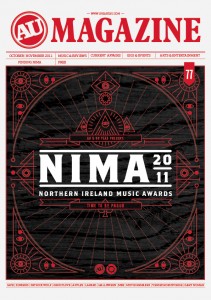 If you’ve spent any time at all browsing this blog, you’ve probably clocked my connection to AU Magazine. Given how much time I spend dedicated to Northern Irish music, there was not a chance I was going to miss the inaugrual Northern Ireland Music Awards, even if it did involve being in Belfast for a touch over three hours.

Award shows always end up being a bit odd as live shows. With bands genuienly restricted to a painfully low number of songs so that (in this case) half a dozen of them can be squeezed in, several sets barely get off the ground. Cashier No.9, for example, get just two songs in, both of which sound a little shambolic compared to their normal style, and then break one of their new pieces of equipment and have to quit early. For what it’s worth, the later rumours that they ‘stormed off stage’ are certainly untrue, they kind of wondered off confused and stood at the side for a moment wondering what to do. I interviewed lead singer Danny on Saturday and he told me they were even thinking of going back on, but while they were working out what they could play minus the new equipment, the presenters had made their way on to do the next award.

Japanese Popstars, who I’d not seen before, impressed with their electro-intensity, but the real story of the night for me was all about Belfast scene leaders And So I Watch You From Afar. Guitarist and defacto front man Tony Wright (he always seemed to be the guy to speak for the band) quit in a shock move last month, but he was back for a one off show tonight. In the long term, Tony will be concentrating on his own project, VerseChorusVerse, but tonight really got me wondering a little about the circumstances behind the split. Tony’s talked about a lack of contact from the band after he had some trouble in Vienna being one of the problems, but it’s always been the on-stage chemistry that’s made And So I Watch You From Afar so special. I don’t have any inside information on this, and I don’t want to come across as stirring, but there’s no doubt in my mind that the chemistry at tonight’s show – especially between Rory and Tony – was not what it used to be. Of course, it’s an unsual situation, but watching ASWIYFA stand on stage and accept their award, Tony stood well off to the side, or play their set with Tony a little disconnected from the rest of the group was quite a sad experience. Of course, they still killed it, with Tony going on a mad cameo into the audience for a bit of crowdsurfing during his ‘final ever song’ with the band, The Voiceless. I really hope And So I Watch You From Afar are the same band without Tony, and that they somehow find a replacement for him with the same chemistry. It’s pretty hard to picture right now.

Stiff Little Fingers won the legends award – I remember seeing them when I was about 16/17 and watching a whole load of punk bands in Salisbury Art Centre. I’m sure I didn’t clock their significance at the time (their biggest song, ‘Alternative Ulster’, is a cry for a change in the old Northern Irish politics, and also the track that AU is named after). I heard some stories over the night of Stiff Little Fingers coming to the Ulster Hall to watch The Clash in the late 70s, a show that ended up being cancelled and causing a near riot because of it (The Clash missed their plane). Being a punk in late 70s Belfast was apparently like being a punk in London multiplied my several levels of dislike. Now, Stiff Little Fingers are seen very differently. They’ve also aged well, putting in a brilliantly energetic headline set.

A great night, which was worth the late-night travel and high-speed visit if only to catch ASIWYFA’s last ever set with the line up I’ve come to love so much. Given the quality of performances that barely even warranted a mention here – General Fiasco’s new stuff, for example, and the quality of the up and coming bands (Derry band The Wonder Villains seem a class act), it’s clear that the Northern Irish music scene is every bit as strong as everyone in Dublin seems to suspect it is. Here are the winners in full: