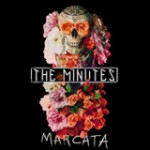 In a city where the majority of high-profile music in 2010/ 2011 seems very much to be of the indie/ electro ilk, The Minutes appear to be digging their own little niche in dirty, sweaty rock ‘n’ roll. Even this crowd of rockers, in fact, started out as another indie band. In an interview at their album launch show, they told us of their transformation from indie rock beige to the uglier, feistier tones of a snarling rock band, describing their previous incarnation as ‘total shit’, and ‘not true to ourselves’. If you needed the evidence, tonight’s show offers plenty.

Mark Austin’s growing confidence as a posturing, growling rock front man has probably been the key. Ten seconds after arriving on the Whelan’s stage tonight, Mark’s launched his guitar up over the front rows, balanced himself on his wedge and started knocking out a series of heavy, driving rhythms that pulse through the venue’s very foundations. An hour later we find him strolling to the back of the room, pushing his was through a sold-out venue to shove his mic next to a horrified looking female punter before belting out one of the ‘slower’ tracks. The flippant finale involves a brusque but heartfelt thanks for the impressive sell-out and drummer Shane Kinsella being absolutely drenched in birthday champagne, along with anybody else who happens to be within a healthy spray range of the stage.

The antics, then, are dirty, edgy rock-out silliness of the best kind, but The Minutes deliver on the musical side, too. With shades of a more refined Electric 6 or an angrier, more compact form of a really old-school punk band, tracks like ‘Gold’ and ‘Monster’ form the heart of a riff-hungry, charismatic set. Tonight’s show is made up of debut album ‘Marcata’ in full, plus a new track that slides nicely into the live mix, and suggests that there’s plenty more to come. Marcata is brusk and angsty, but also impressively lyrically deep, not that you can pick out many of the words tonight; they all fall deep in the mix, the tone, riffs and sing-a-long crowd giving the game away. The entire set seems to sweep by in a blaze of strutting and abrasive chords, with the rumbling bass line adding a depth to the live sound and Austin’s on-stage antics at the absolute heart of everything.

The best thing about The Minutes is their utter lack of live pretentions. Meet them in person, and you’ll find their shambolic, unpredictable and liable to indulge in a whole lot of mildly insulting banter. See them live, and all the above still applies: having chords so tight you could record a live album from any gig you happened to stroll into (providing you’re willing to endure those slurring vocals, of course, which are far tighter on record) does nothing to detract from a feeling that this is a band living on the very edge of something. It probably isn’t ready to fall apart at any moment, but the rock-posturing, celebratory glares and occasional insulting witticisms add to an image of The Minutes as a band who just don’t care what anyone thinks of them, or what tomorrow brings. In blasting out such harsh, throbbing, memorable riffs, their seeming indifference to public feeling just makes them all the more enticing.

As published on Goldenplec.com, October 2011 (link).