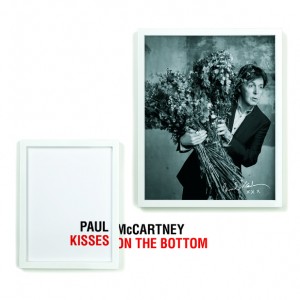 Whatever side of the Lennon/ McCartney divide you fall, it would be spurious to question the song writing talents the latter’s displayed over the years. Equally, though, it’s an almost inarguable fact that over the past decade or three, McCartney’s standards have dropped off quite spectacularly. Hell, it would be something of a miracle if they hadn’t. In Kisses On The Bottom, he takes things a step further in edging out of the song-writing process almost entirely.

The album, widely touted as a belated acknowledgement of the Beatles pre-war influences, features only two McCartney originals. ‘My Valentine’ comes across like a glance at Paul’s past; a nostalgic glint in the eye as a he recalls an old lover in delicate, dulcet tones. The second, ‘Only Our Hearts’, is an album closer that’s in a similar vein to the surrounding material. It’s a calming, downbeat Christmassy number with a swooning, playful melody and a warm vibe; pleasant, but far from outstanding. The remainder of the album is lifted straight from the dancehalls of Paul’s elders, littered with the old standards, both familiar and waif-like in their production.

There are tracks you’d have to be living under a rock not to know: Arlen’s ‘It’s Only A Paper Moon’ is given a light-jazzy backdrop, sped up a touch, and taking on a far more fun-loving angle than the many, often harrowing reproductions its received over the years. It’s not awful, but it does lack the emotion that made the track special in the first place. ‘The Glory Of Love’ is similar, veering less from the established take on the song, but featuring plenty of in-track hum-along moments, and an aged production, complete with static undertones that give a real ‘played on an aging record player’ affect.

It’s often in the tracks that have withstood the erosion of time less well that seem more essential, and even then, we’d generally opt for earlier versions. Still, ‘Get Yourself Another Fool’ – complete with another ye-olde production angle – transports the brain to more innocent times, and has a nice leaning towards free jazz, backed up in withdrawn, conservative vocals. ‘Bye Bye Blackbird’, similarly, belongs sputtering through a gramophone; a fairly straight up cover, but a decent easy-listening effort nonetheless.

The problem here was apparent from the start. In being fairly faithful to the originals, McCartney might be exploring his own roots in a way that offers a little insight into the Beatles less-experimental early material, at the very least, but taken as a work in its own right, it’s not only (inevitably) dated, but – in part due to McCartney’s commitment to reflecting the originals – not particularly outstanding, either. The slightly muffled production style is a nice throwback, but it can also seem a touch patronizing, a step too far in attempts to faithfully recreate the sound, and something that detracts from the musical quality. At its low points – the less said about the playground-like ‘The Inch Worm’, the better – it’s of a hotel cover band standard.

If we were feeling particularly unkind, we might label this outing a vanity project. A fairer call, though, might be that it’s a glance at Paul’s ultra-conservative side. It’s an unnecessary one, sure, in that the McCartney vocal is particularly mellow and, to be brutal, does little to develop the original, but that doesn’t make ‘Kisses On The Bottom’ bad in itself. It just reflects a songwriter in his 70s, who in reaching his 15th solo effort, might just be lacking the creative passion he once fostered. What’s left is a pleasant, listenable but almost entirely superfluous footnote to a patchy recent career.