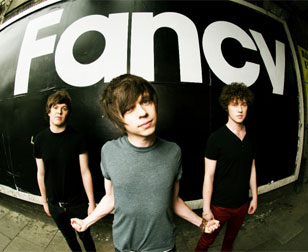 Having established themselves as stars of a flourishing Northern Irish music scene, and made a substantial impact over in the UK with some high-profile radio play and country-wide tours, General Fiasco are a band on the rise. Strangely, they still seem to have made little impact in the Republic, but with new guitarist Stuart (brought in from the now defunct NI band Panama Kings) and a new EP on the way, things are looking up. We caught up with lead singer Owen Strathern before the opening show of their latest UK and Ireland tour, backstage at Dublin’s Academy 2…

You have a new EP coming out in a couple of weeks. What can we expect?

It’s a bit of a departure for us, but with the same familiar feel I guess. It’s still guitar, indie/pop music, but I guess it’s a little more groove oriented than our previous stuff, and hopefully just a little but more in-depth, too.

What made you put out an EP instead of an album?

We’re kind of using the EP as a single, really. Instead of a single, we’ll be putting out two EPs and then an album. You can pre-sell EPs but you can’t presale albums on iTunes, that’s one of the reasons. The other reason is we’ve been away writing music and recording stuff for more than a year. We’re going to go right ahead and record the album as soon as we’re done with this tour. There’s some stuff that’s a bit more creative on the album, so it’s nice to give people a kind of stop-gap between the two. Until spring, until the next album, people coming to a show were only going to have the album, so why not give them an EP to listen to as well? They’ll have eight more songs rather than just the same old ten.

You’re a proper small town band in a way, a little disconnected from Derry let alone Belfast. How has that affected how you’ve written and how you’ve grown together?

I guess when we started there were no direct influences from any kind of local scene or local music. We’re more influenced by what we see on MTV 2. I don’t know if that’s a good thing or a bad thing. I guess you have to take your influence from somewhere, so if it’s watching bands in your local or on TV, I don’t suppose it makes too much of a difference. The trouble with being part of a scene or whatever is that it’s maybe kind of limiting. If you’ve got three bands that sound kind of similar, only one is going to break through. If you’ve got three bands that sound like Two Door Cinema Club, there’s only going to be Two Door Cinema Club. Maybe it’s better that we’re not involved in that.

Would you say you’re more linked in with what’s going on over in the States than the rest of Northern Ireland?

The band’s we’re influenced by… I can hear it in our music that there are elements of emo-ish rock, emo rock like Jimmy Eat World and Weezer, not proper emo. Maybe people try to lump us in with American pop-punk and things like that. Fair enough, if that’s what you hear, but it was never our intention to be one of those bands with hoodies on and all that.
If you listen to something like ‘Ever So Shy’, I think you can really hear your accents on it, a lot more than in say ‘Buildings’, which could be mistaken for American…
I guess it’s to do with the words we’re using, and that some words come across more Northern Irish than others.

How much difference has taking on Stuart (new guitarist, ex Panama Kings) made?

I guess it was always changing from the moment we finished Buildings, so we felt the need to do something different. We went through a lot of different phases. There was some very slow stuff, some kind of like guitar/ American stuff. When we started writing, the stuff Stu was more into was the kind of intricate, guitar, groovy stuff. I guess that just encouraged us to go that way and finish those songs, write those songs together. I can definitely hear the elements that Stu brings to the band, and I think some of them are influenced by Stu’s last band. The Panama Kings were really cool.

How have you taken the closure of 6 Music? Hugh Stevens was quite heavily behind you, wasn’t he?

Yeah, and Steve Lamacq as well. He played us a bit on national radio. For whatever reason, people have little soft spots for you and always support you. It’s a great thing, they’ve continually supported us, and their support could be the difference between us getting and not getting something else. Whenever you used to flick through MySpace, people would have on their page ‘I’ve been introduced by 6 Music’, and there’d be loads and loads of that. I think that bands in Northern Ireland will have to work harder to get themselves out there. Not that I think they were playing bands just because they were Northern Irish, but we’ll have to work harder to get that exchange.

You’ve been on a lot of TV stuff, soundtracking various things. Do you get much say in what you end up on?

No, not at all. In America we were on this programme Jersey Shores, they played about five of our songs. I watched it one night as people on Twitter were tweeting me about hearing it. It’s something you don’t really have any say in. It’s had its positives, though. Our album’s up on iTunes and people were buying it over in America off the back of thirty-second clips on a TV programme. People were willing to source out music and even buy it, crazily enough.

The first line of ‘Ever So Shy’ talks about being a bit sick of the drinking/ party scene. What are you like on tour, do you go a bit mental, or do you still see things that way?

You go through different phases I think. We like to have a good time like everyone else. This is the first night, so we feel like we’ve been saving up for ages and we’re ready to cut loose again. But there are times when we’re sick of it.

Last year you supported Snow Patrol in Bangor, playing in front of a huge number of people. Did that motivate you to push on?

Definitely. I think it’s something that people dream about, and that gives you a taste of it. There were maybe 20,000 people in Bangor, and we did the Odyssey with them as well. I can barely remember anything about it as I was so excited about doing it. It wasn’t like playing any other gig. You never became aware that you were there playing it, we just went into autopilot to get through it. But it would be nice to one day do it again, maybe to our own crowd.

There’s a big difference between the shows you play here and the places you’re selling out up in Belfast, in terms of the number of people you’re bringing in. Does that feel a bit odd?

Yeah, Belfast has been very consistent for us. Even before we’d done anything in Belfast, we ran our own gig and put up posters for it and sold it out. It was at that point that we felt like we could make a go of this. We get a reasonable crowd here, but in other parts of the south we’ll play to a handful of people. It’s the same in the UK, though. There are places where we’ll sell out. Glasgow always sells out first, and London’s starting to get really good. Manchester’s good. Then we can play places where we just don’t connect. But it’s getting more and more consistent, so hopefully we’ll get to the stage where we don’t have that gig that we’re worrying about people coming to.

What do you use to measure your success as this point? Is it sales, how many people come to the shows…

I guess it’s… sales are getting less and less significant for smaller bands. When you look at the charts, it’s all big pop acts. Even a guy like Ed Sheeran, he’s obviously super-pop, but its acoustic guitar and a guy singing. That doesn’t happen to a band now. Obviously you want to sell records and make money, but the real reason I want to sell records is so that people come to shows. That seems to be happening, so hopefully that’ll just continue. Success would just be coming out to a good number of people every time, that’s the next step. The last tour we played to 500 people a few times. If we could get to 1000 this time we’d be very happy.

What would you be doing now if you’d never really got anywhere. Would the band still be going?

It’s a hard one to say. I do love writing music, and I like to think I make music for the right reasons, but I think I have ambitions to do bigger things, and if those ambitions weren’t starting to be realized, I don’t know if I’d be happy going to the same bar every month and playing to fifty of my mates. I’d probably step outside of the band and write different kinds of music if it wasn’t working.

As published on Goldenplec.com, click here to view original.