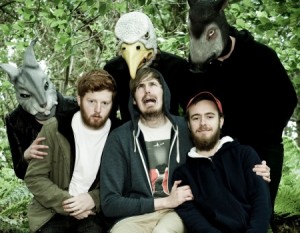 Having started from growling, embittered hardcore routes, north-coast rockers Axis Of scored their biggest hit yet when they took a mellower angle with the anthemic ‘Port Na Spaniagh’. Since, they’ve established themselves as one of the leading lights of a magnificent Northern Irish rock scene. Trust us, having the brother of ASIWYFA star Rory Frier’s in the band has little to do with that success. Apart from rock running in the family, of course. Vocalist Niall Lawlor tell us the story so far…

Some folks down south won’t have heard your brand of vicious alt rock just yet. For them, who are you, and what are you up to?

We are Axis Of, hailing from the north coast of Ireland but relocated Belfast. We play crushingly heavy pop music to put it simply. We are in the midst of getting things ready for our debut album and preparing tours to coincide with the release.

Rock Sound, by all accounts, absolutely love you. How has the reaction to Port Na Spaniagh changed your profile in general?

It’s definitely helped our online presence to no end. I think it shocked people a bit as until then we were seen as a bit of a straight up hardcore band based around fast paced drums and screaming, having a song with a big catchy chorus seemed to change at least some peoples perspective on us. It also helped us in the live setting as it gave the crowd something to sing along to without having to listen to the song 100 times to decipher what we were saying.

Did the Maida Vale sessions feel like something of a coming of age?

I would say so, as overjoyed and thankful as we were for being given that opportunity, I was a bit nervous we would turn up, show ourselves up like amateurs and make them regret ever choosing us. I was quite surprised how well it all went, the guys in the studio had recorded Bowie and hundreds of other amazing artists, but they said we were by far the best….I joke, but we got all our takes done efficiently and were all finished with around 2 hours of our time slot left. The guys were saying they were impressed by our tightness and professionalism. They have obviously worked for some really big names, so that’s a compliment of the highest order.

Heavy rock’s a million miles from the ‘in’ sound in music right now, which is probably a great reason to be playing it. Does being ‘unfashionable’ make the scene more concentrated, or just introduce more challenges?

I guess it depends on perspective. In my lifetime guitar music (especially heavy) has never been overly popular in the mainstream, well at least in a chart sense. So for me it’s always been the same, heavy bands will continue to be sustainable just on a smaller scale. Even within the confines of heavy rock, there are many fashionable and unfashionable scenes. You see 1000s of kids going to see a metalcore band covered in tattoo’s where as a grunge band would maybe struggle in this day and age. I think we’ve been blessed in the sense that our music’s kind of hard to pin down, which means we end up playing with many different kinds of bands to different types of people.

The album’s seemed like a long time coming. How’s progress?

It’s pretty much done, a few tweaks here and there. It’s been a long time coming for sure, we’ll probably be totally sick of before it sees the light of day, but at this stage we absolutely love it and can’t wait to get it out.

We heard you once had a fairly spectacular van crash in Germany. Have there been any other huge ‘moments’ on tour?

The crash really put things in perspective, a few months before hand we got clamped for messing up our road tax, and got fined £300. At the time it was the worst thing we could ever imagine. The crash just took things to a whole new level, and we’re still paying for it now. It’s a shame because the tour it happened on was shaping up to be the best we had been on. Being pulled over by the French police because our van was not in the correct weight restrictions was pretty scary, but even though we were clearly breaking the law, they let us go (presumably) because we were dumb and Irish. 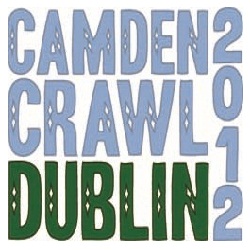 You seem to tour relentlessly. What are the best and worst things about being on tour?

The best is playing packed out shows full of people who love you; the worst is playing empty shows to one person who hates you (the promoter).

There still seems something of a disconnect between the Northern Irish and Republic scenes – by all accounts Axis Of are doing better in terms of show sizes on the UK mainland than down south. Is there anything in particular that you think causes the relative lack of border-crossing music?

I see what you mean; there are plenty of bands who would get a ferry over to the UK before crossing the border for shows, which makes no sense at all. Maybe some bands see the mainland as the quickest route in getting to labels, managers etc. To be honest, we love playing in the south. I would say our shows in the south have grown bigger than that of the mainland, which is just natural, as we get to play in the south a lot more, and we get the opportunities to do better gigs because our pool of contacts in the south is a lot better than in the mainland. Our shows in Cork, Dublin and Galway have been growing, so at every opportunity we try to play these places, as well as small towns, as they can turn out to be the most fun. The south is such a good resource, nowhere in Ireland is too far from anywhere else in Ireland, so you can always do one off gigs, which can’t be said for the UK, as you would need to make the ferry trip worthwhile. Plus Ireland is much nicer to look at.

How much difference have ASIWYFA made for bands like yourselves in championing Northern Irish rock – their promotion seems far more genuine than a brotherly thing?

A massive difference, we’ve found people coming to our shows solely off the back of our association with them. Because they’re so genuine in their music, people believe every word they say, so when they champion a band, people listen. Plus its not all talk either, they have helped us out massively. They were instrumental (apologies) in helping out after the crash, they’ve got us on their gigs playing to sold out venues all over Europe, they’ve lent us gear and transport without hesitance and are always there for advice. I think it’s safe to say without them we wouldn’t be where we are today, and without us they would probably be a lot more successful.

You have an impressively ungoogleable band name. How did it come about?

Naming the band was one of the hardest things we’ve ever done. Do you go for bland and unoriginal or eccentric at the risk of sounding pretentious? It’s a fine line. It comes from the phrase Axis Of Evil, but too many bands were called that, and we wanted it to be a bit less embarrassing. Bear in mind this band started when we were 17. Not that we’re making excuses.

A lot of your tracks have an angry edge. What’s make Axis Of angry in 2012?

It’s important to keep context, we’re not constantly angry, we all come from comfortable backgrounds and we’re incredibly grateful for the privileges that we’ve had through our upbringing. I guess it’s like any person or band, some things make us happy and some make us angry. One thing that is incredibly frustrating is the campaign to bring fracking to Ireland, we’ve been here before with the Lignite campaign and it seems people haven’t learnt. The damage it will do to the local environment with contaminated water and air, gas leaks and explosions and endangered local wildlife is not speculation. These effects have happened everywhere that fracking has taken place. Some say it will boost the local economy, but that’s far from a given with most of the resulting gas being shipped overseas. Asides from that it will industrialise beautiful parts of the country, which is something that can’t be taken too lightly. There is very little to gain from the whole thing and it will only benefit a very select few. You hear about things like this happening all over the world, it’s just especially upsetting when it happens on your doorstep.

Your live shows have gained quite a reputation. Is there anything in particular you like to throw into a live set, or is it just a case of keeping things as energetic as possible?

Asides from all the volume and heavy riffs, we like to keep it fun and upbeat. It’s good to see people mosh obviously, but we like to encourage dancing, singing and as much crowd surfing as possible. Not everyone likes getting pushed about so it’s important not to alienate anyone. If a gig’s going well, people will vibe off our energy, it’s a really nice thing when that happens. My dream is to have a crowd of 1000 people doing the same synchronised line dance to one of our songs. When that happens we’ll know we’ve made it.