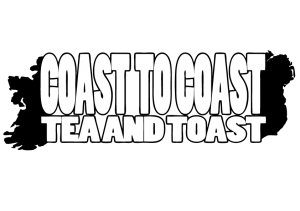 Friday was one of the weirdest and coolest days I’ve had in a long time. There are certain moments in music journalism that have made it all worthwhile; usually short, sweet interview sessions, happening across bands that just blow my mind, or getting the chance to meet a hero. This one, exhausting as it was (how Chris, the driver, managed really is beyond me), definitely goes straight on the list.

The concept of Tea and Toast Coast to Coast was brilliantly simple. The idea came from Aidan, the editor of Goldenplec, and a friend of his Chuck: every year they do something to raise money for Downs Syndrome Ireland, and this year they decided to combine things with Aidan’s other passion, music. The idea was to stop off in every county from the east coast of Ireland to the west, and back again, watching a one-song performance from a local band somewhere at the roadside, and then moving swiftly on to the next spot. Conceptually simple, but logistically nightmare-ish.

So having talked my way onto the team – by virtue, most likely, of both my extreme enthusiasm for the idea and being one the most widely published Goldenplec writers, and so most likely to be able to grab a little more coverage along the way (I’n cheating and putting in my own mag, De\Code, too) – I found myself stood at on a roadside in Portmarnock at half past seven on a Friday morning, watching a band curiously named ‘The Clap’ start things off. Whilst munching on some toast and slurping some tea, of course.

Things quickly went wrong. I think it was in part an optimism surrounding the travel times in the schedule, but things were exacerbated by the motorbike cutting out on the way down the road between the first two venues, as well as it taking several stop offs for us to realise how borderline ruthless we had to be with the bands. After that, though we never made up the time, things went far more smoothly. I’m not going to recount the entire thing, of course, as we saw twelve bands on the road, and another six on arriving back to Malahide Yacht Club and the really quite impressive reception, but there are certainly a few highlights worth bringing up.

The best parts of the day were often the banter, the sense of achievement that came with Twitter trending despite there only being five of us on the trip (can you call Twitter anything an acheivement? It felt like it…), the radio station calls and the sheer distance covered. I wasn’t doing much more than sitting and filming (did I mentioned we filmed the entire thing, to give the bands publicity?), and I finished the day as exhausted as I can remember being in really quite a long time. Anyhow, here are what I consider to be the five musical highlights, though it has to be said that the general standard, given that the entire things was a first come, first served charity exercise, was exceptionally high. This is probably a little unfair on the later acts, as we were all a bit too tired to really take things in by then, but here are the best moments:

It turns out this lot are from Dublin (I’m still not entirely sure why they were in Strokestown that day), but they have only one preview track available on the Internet so far, and that’s the one they played us. Stunning it was, too; a mellow acoustic number (a general theme, as it’s barely worth plugging in for one song) performed in front of the town’s castle-like gates. Only three of us watched and filmed, as the hot water needed replenishing, but this turned out fantastically well, definite ones to watch:

After the best part of ten hours driving, The Rusty Fixtures are just what you need. We filmed this five-piece in front of the dumpsters in a petrol station car park, which sounds stupid, but turned out to be wonderfully atmospheric. They welcomed us with a chorus of kazoos, pumped us full of energy and sent us on our way with Fishing-themed lyrics still ringing in our ears. Here’s what we saw:

This one was particularly odd as it took place in Chuck’s front room, with the occasional confused passer by staring in the window and wondering what had possessed people to film a living room music video at 9am on a public holiday. The video doesn’t convey quite how powerful the girl’s voice is; there were times when we were worried for the neighbours, but she’s definitely another one to watch out for:

Another car park set, this time in front of the T+T team’s vehicles behind another petrol station, and _Strays absolutely nailed it. We suspected we might get something heavy when we met them,; it turned out that they’re really quite calm and considered songwriters, and another band that I’ll be going out of my way to catch again should they ever make it up to Dublin. This shows some serious talent:

We were all looking forward to Mr Ebby from the start, as he stood out as the most original of the musicians who volunteered to take part, a ukulele soloist. He seems to be doing really quite well in Galway, and patiently waited for us at a time when the being behind problem was at its height, delivering a gorgeously subtle, emotive song in front of a pub in Ballymoe, and then didn’t seem the least bit peeved when we ran off straight afterwards. Lovely guy, fantastic songwriter, if this is anything to go by:

Things finished up with Aidan and Chuck making speeches in the Malahide Yacht Club, while six other bands entertained us and we forced down a load more tea and toast. A seriously surreal day, with 650kms of driving through Irish country roads, indulging a serious passion and making some charity bucks along the way. I’m sure Aidan would like to thank the sponsors Meteor, Lyons and Johnston, Mooney and O’Brien for their support (as would I – this experience might not have happened without them); if you do happen to have some spare change sitting around that might help Downs Syndrome Ireland, please click here to throw a little in the hat.

Congrats to everyone involved, I sincerely hope this happens again next year!