Goldenplec’s route to the web awards went something like this: our esteemed leader, Aidan, got on Facebook a few weeks ago to tell us he was worried it would be the first year in five that we hadn’t got a nomination. With a new website designed rolled out over the past few months and plenty of heart-and-soul poured into the writing, team GP were as pleased for Aidan – who puts in hours for no more reward than the satisfaction he takes in actually running the site –when that nomination did come through. We found ourselves in the final five nominees for ‘Best Music Site’, we vowed to have a long overdue meet up and make a big night of it. 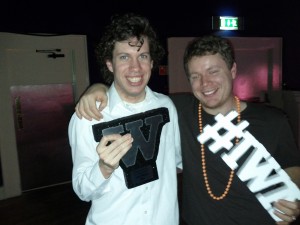 So come last night, we landed at The Mansion House just in time to ogle the starry ceiling and get a few rounds in, the ten of us occupying the second row and having a chuckle at Rick O’Shea’s banter. I think it’s fair to say that, given the standard of the opposition, none of us expected to win our category. I also work for the very lovable State.ie, so personally I had a bit of a two-horse thing going on, but Nialler9’s long been not only Ireland’s top music blogger, but one of the top music bloggers in the world. Swear I’m Not Paul’s also a quality outfit, and Oxegen’s website looks pretty special. If we’re totally honest, we probably saw ourselves as rank outsiders; we just came down for a meet and a bit of fun.

So we sat through a handful of categories, saw a lot of very worthy winners and followed Rick’s suggestions by plastering ourselves with beads, bubbles and face paints in anticipation of the glow in the dark rave. When our category arrived, team GP gave a huge cheer when our name was read out, making the most of our mention for the night. And then came the brief pause before Rick read out our name again.

The second time was a bit of a stunned silence on our row. Aidan headed up and picked up an award that I know he sees as a something that’s made ten years of labouring on this website worthwhile, and we all looked at each other a little glazed over for the next few minutes with 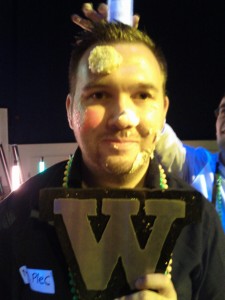 ear-to-ear grins on our faces. Plenty of GP members had met only in online form before last night, and we’d just been handed the ultimate excuse for some real-life bonding and plenty of motivation to move forward together. We’ll have to drop in on Aidan regularly to eye up our weighty piece of granite, too!

Overall, the Awards were extremely impressive this year. Colm O’Regan’s introduction as mid-show on-stage comedian lit the place up with plenty of topical web humour, and the disco lighting and props were a really nice touch, as was the huge stand of ‘cup cakes’ (literally cakes in cups) and savoury snacks that turned up towards the end. We’d like to congratulation all the other winners (click here to see who won in each of the  category), in particular TheJournal.ie, who won the biggest prize, ‘The Grand Prix’, after just over a year of operation, a phenomenal achievement.

Of course, we couldn’t leave without celebrating in true style. For team GP, that meant inventing the verb ‘to face cake’ and face-caking our humble leader, as well as taking some shots with our trophy up on the podium before hitting the town. I’m told our esteemed leader’s few pints last night were the first time he’d had more than a sip of ye auld booze in the best part of 8 years. Just goes to show, this meant the absolute world…

Bring on next year! 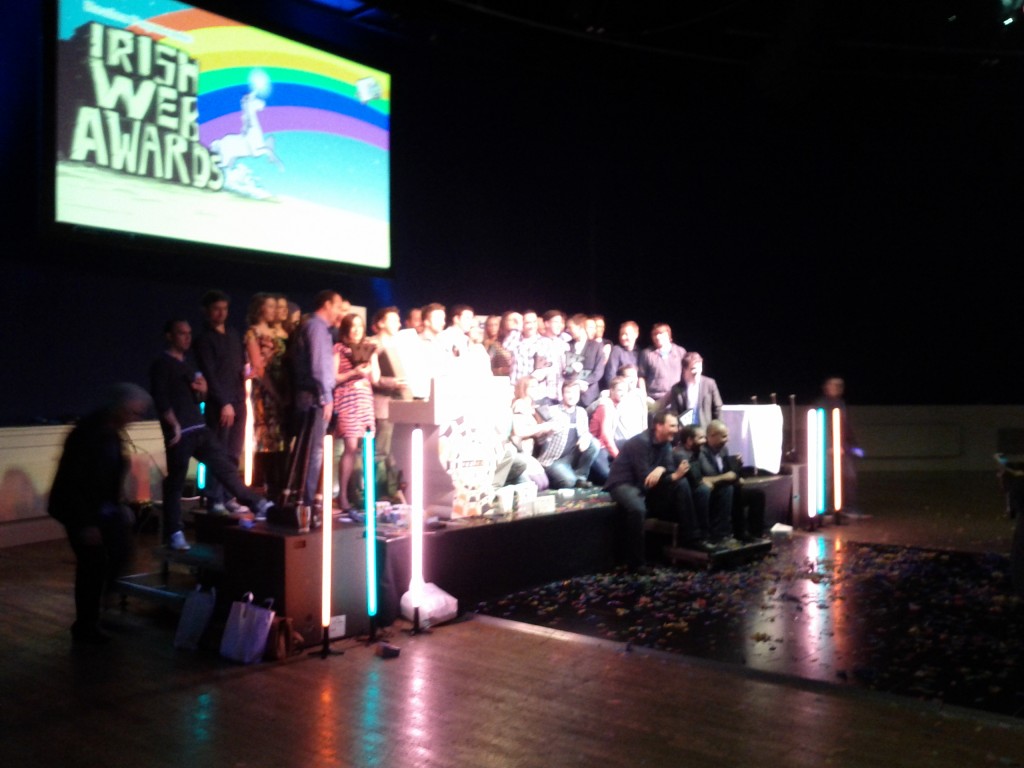