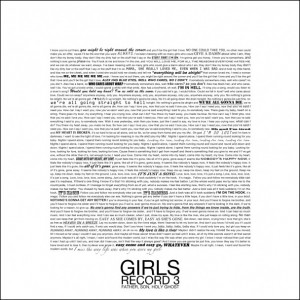 Since first appearing on our radar back in summer 2009, Girls have – superficially at least – appeared to ignore their sobering back-story and skip along to the same happy-go-lucky beat. Listen harder, though, and even the likes of routine-basher ‘Hellhole Ratrace’ saw an upbeat gloss disguise far dingier lyrical undertones. Father, Son, Holy Ghost – while still occasionally drenched in childlike ditties that form the palatable indie-rock equivalent of candy floss – sees Owens and White unleash their rockier tendencies in an album that’s both stark and a real conundrum of a role reversal.

‘Vomit’ is perhaps the key example. Stark and shadowy, it builds to a monstrous crescendo and flaunts a lightly-drum-backed guitar solo at its heart. Bizarrely, the song’s lyrically focused on the search for love – intense but almost invitational – yet its title seems to offer a stab at the superficial glossiness that coated many of their early efforts. The same goes for the dingy way in which the lyrics fall out: read the words on your page and the message could be an offer or a cry for help, and the meaning’s blurred further by a damning title and a moody performance. The mind-jamming layers of Owens’ thought process seem to be unveiled on many a corner, with the group simultaneously launching a sound that allows tracks like ‘Die’, to feature an almost Fleetwood Mac-ish extended opening riff, and brilliantly confounding with their pace changes and intriguing songwriting non-sequiturs.

While Father, Son, Holy Ghost still features occasional summer-pop silkiness, it also succeeds in exploring the genre palate far more thoroughly. At times Father… seems to be markedly heavier, yet there’s also a sickly sweet yarn that simultaneously nods at today’s trend for static undertones and bass-layering. The guitar part fluctuates from an increasingly edgy and experimental vibe to succeeding in being so sugary that, in tracks like ‘Just a Song’, it flips over and turns oddly dark and depressing with repetition. Owens’ sometimes-pained vocals are occasionally weaned down to an almost minimalist level, yet when he does open up, the tracks are invariably formed tightly around that nasal hum.

Get past those glossy opening tracks, then, and you can entirely disregard that expected early Beach Boys inspired façade and start pondering how Girls are going to mix their previous efforts with this newfound intensity live. It’s a strange problem to be faced with, but a happy one: at times Father, Son, Holy Ghost’ is a penetrating, riff-ridden journey into the hippier corners of rock and roll; at others it’s close to a nursery rhyme, but poisonously laced with a dark message that’s lost at first listen.

The most obvious connection to Girls’ previous falls in the tonal rollercoaster of the verses to opener ‘Honey Bunny’ and the sound of Christopher Owens exceptional lead vocal, which is as distinctive as it is malleable. Like their previous efforts, the songwriting unravels with time to become unexpectedly deep. Unlike the core duo’s previous outings, this one’s delivery is jarringly haphazard and increasingly multi-faceted. It’s been a few weeks, and we’re still not sure if certain songs are pick me ups or seriously unnerving. In fact, it seems to depend on our mood, and that’s the true beauty.