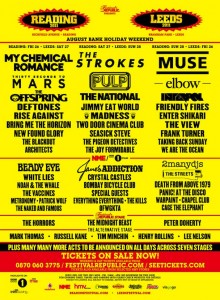 2011 was a vintage year for me in a whole lot of ways. For a start, i got married, spent three weeks in a continent I’d never visited before and interviewed a couple of my real heroes (not least the incredible Scroobius Pip, but that’s a rambling for another day). It wasn’t really meant to be a big year in music, but it ended up being possibly the biggest ever. 107 shows. I haven’t even tried to count how many acts, but considering there were nine festivals included in the below, I’m pretty sure it’s well in excess of 300, possibly even 400. Anyhow, here’s the lowdown, including a few of the highs of the second half of the year picked out:

Yes, it’s Oxegen, and frankly I’m glad it’s been cancelled in 2012. IT saves me the annual internal debate between the part of me that knows that is has the worst atmosphere of any festival ever invented ever, and looking at those line ups and thinking it’s unmissable. When you get a media pass, line up inevitably wins out, though I’ve yet to actually sleep a night in Punchestown, and I can’t see that changing. Foo Fighters, Arctic Monkeys and…yes, shock horror, The Vaccines were immense. 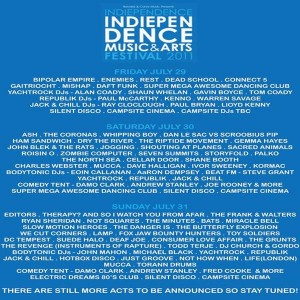 Another festival, but they are a great way to see live music. Zombie Computer were particularly red hot, and Dan Le Sac Vs. Scroobius Pip are a growing fixation for me, and total mayhem live. Incredible stuff. Ash, on the other hand, are well past their sell by date, but for a little festival in the sticks in County Cork, this is pretty great. 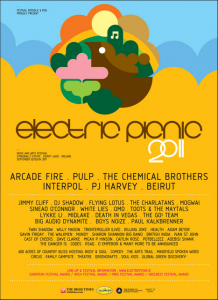 I grew up with Reading, but seeing things from the journalistic side along was more than enough to make me want to go back. Throw in lines up like the above, and time spent backstage interviewing Cloud Control, Rival Schools and Rubberbandits almost seemed a waste. The Strokes and Pulp double headline = 90s paradise.

I don’t think Electric Picnic’s quite as good as the consensus seems to be in Ireland (a league above Oxegen, yes, but that’s hardly a glowing comparison), but days like this are pretty special. Lykke Li, Grouplove and Arcade Fire in particular were great this day; I can’t see myself every going out of my way to see James Blake again, though.

Instant conversion. I really disliked Julie Feeney the first time I saw her; this time, in an initmate setting and with her theatrical side at sensible rather than performance-art levels, it really clicked for me. Absolutely gorgeous stuff.

24/09 – The Danger Is, We Cut Corners, Mail Order Messiahs (The Grand Social, Dublin)

The Danger Is are a good band. We Cut Corners are an absolutely outstanding band, and this night is when I really cottoned on to just how big they were going to be. The live show has stepped up like no other local band over the past few months, and the song variety is wonderful. On the one hand I can’t wait to see them grow; on the other I hope they’ll still play intimate venues. Immense.

If I’m honest, I went expecting a show that leant majorly on Damon Albarn and Flea. This certainly wasn’t that, but the array of musicians involved, most of whom were at the top of their game, was fantastic. I was hugely taken with Fatoumata Diawara, but an order for albums from three of these bands went in the next day. Great work. Damon, bringing them together. 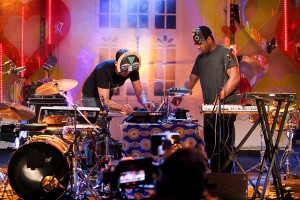 Another ‘bingo’ moment, the one when I realized that actually Foster The People have plenty more to offer beyond the slightly irritating ‘Pumped Up Kicks’. This was a win simply because it was such a phenomenally energetic, likeable show.

I’ll be doing my best to get down to Other Voices every year from now on. This festival is so crammed with charisma; so far from the conventional mass-market festival that it almost changes how I view music festivals. An absolute class above anything else I’ve been to in Ireland, and SBTRKT and Wild Beasts were unforgettable on my second night.

Not a bad list, I’d be extremely surprised if I got close to the quantity this year. I’ll be doing my best to add a few new acts and a few I’ve never seen in for 2012. Here goes!