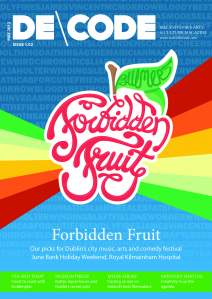 Sadly, the second edition of DeCode, May 2012, has been hit hard by a single problem. Having done the hard bit – we’d gained significant, dedicated advertisers and put things together to a print format we were very proud of – we were let down at the last minute by a very poor printer, who was simply unable to live up to their promises. As legal action is now pending, I’m unable to say a whole lot more than that at this stage. The end result, anyhow, is that due to the money wrapped up with the printer for the time being, we’ll have to stay online only for May and June at the very least.

We do, however, still have a magazine we’re very proud of. Issue 2 is sponsored by Forbidden Fruit, a big Dublin urban-culture festival, and features a whole host of other culture-themed articles on cinema, theatre, museums and in this case a whole lot of music. We will be keeping music to the 30-40% level in future issues – we’re not particularly aiming to be a music magazine – but with things going so well for musicians in general around Dublin at the moment, it can become a hard thing to ignore. We’re already well on the way with our third issue for early June, but here’s a full summary of De\Code’s second issue. Click into Issu, below the contents, to read:

Forbidden Fruit – our picks and tips for the festival (by James Hendicott, Elaine Kirwan and Claire Dalton.

-The Ninja Filmmaker/ Feel Good Lost – A glance at Ireland’s up and coming filmmakers – by Claire Dalton and Eoghan O’Sullivan.

– Delorentos: Back from the Brink – Ireland’s alt. pop stars return from their ‘last gig ever’ – by James Hendicott.

– From Blog to Book – the rise of Ireland’s food bloggers – by Ken McGuire.

– Let the Meetings Commence – An electric approach to bringing art together – by Andrew Donovan.

– Needling About – the social side of knitting – by Elaine Kirwan.

– The Play’s the Thing – a guide to the best of Ireland’s theatre in May – by Kevin Donnellan.

– Irish Album Reviews – The Spook of the 13th Lock, Dott, The Riptide Movement, The Gandhis, Last Days Of 1984.

– Lit. Review – The Light Between Oceans, The Unlikely Pilgrimage & The Last Dance – by Elaine Kirwan.