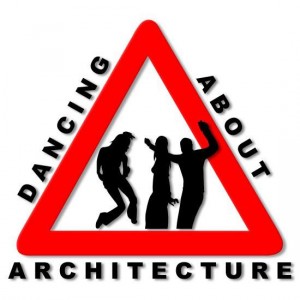 Dancing About Architecture is a free music-focused journalism course created by Una Mullally. Unless my memory fails me (apologies if that’s the case, Una), it was created in response to Hot Press’ own, expensive music journalism course, which plenty in Dublin, myself included, were more than a little sceptical about when it was launched. I decided to attend this year largely as in five years of pretty intense music and travel writing, I haven’t spent a whole lot of time actually talking about what I do. In fact, editorial feedback aside (I generally seem to do okay for that), the only way I can really measure my level is who’s hiring me. Identifying issues is sometimes easy and sometimes hard, but it’s nice to have a target. That’s what this blog entry is about – self-evaluation – but before I get into that, a quick thank you to Una Mullally, Jim O’Carroll and Patrick Freyne for last night’s first session.

Forgive me, then, if this is a little ‘me, me, me’, but the discussion raised some really interesting points that I need to mull over from my own perspective. Naturally, I felt like writing about them. There are three areas in particular that grabbed me. I promised myself before I started that if I was going to attend, I’d use the evenings as a measure of where I am, and for a little self-evaluation, because I find it surprisingly difficult to get context in the industry. There are the things that jumped out for me:

This is something that’s been on the agenda for me for a while now. It doesn’t take a brain surgeon to work out why: as of now, the list of reasonably regular magazines and websites I contribute to reads like this:

I have two very serious and time-consuming projects on the go, too, that I don’t want to divulge too much about just yet, suffice to say they’re adding to the workload. When you factor in that I’m also an English teacher, which consumes about 20-30 hours a week, you can imagine how difficult all that it to juggle. Sooner or later, something’s going to have to give. The problem is choosing what.

I don’t want to single out any of those publications, but I’ll summarize by saying some of them pay very well, and some of them don’t pay at all. I really related to Jim O’Carroll in the discussions last night. That’s not so much because I feel my writing can be compared to his (let’s face it, the man’s both prolific and highly readable), but because I see a bit of myself in the way he’s fought his way into the industry. When it comes to the hyper-activeness he obviously has, I can be the same with writing, if not so much in life. I basically do anything that I think might benefit me in the future. The thing is, I can’t keep doing all of it, especially once summer roles around and the teaching inevitably becomes a forty hour per week (plus) thing. To carry on would – at the very least – mean a significant drop in quality. That means I face a difficult choice.

On the one hand, I could declare myself a ‘professional’ and stop writing for free at all (or at least only in exceptional circumstances). Even with a fairly decent handful of major publications under my belt, though, whether I’m prepared to call myself a ‘writer’ still depends a little on my mood; where does that line even lie? I realize that looks odd when I have ‘writing’ in the title of this website, but when do you become a writer rather than just somebody who writes? Is it when you can make a living? The fact is that I can make a living as a freelance writer. I have done in the past, and I survived. Not comfortably, and I do like teaching (in itself, as well as a safety net), so it’s not something I’m particularly looking to do as a solo career anyway. I do a lot, and I think I probably do fall closer to a pro than a hobbyist at this stage, but I still have difficulties introducing myself as a writer first and foremost.

Financially, my main problem is loyalty. I say it’s a problem – I do feel like I owe certain people in Ireland for getting to the position I’m in now, and even if it means I’m working huge hours and they’re not paying me, and I am reluctant to give up. That, and they’re nice, regular outlets with friendly staff, and the community part is important, I think. Sometimes more important than the published pieces themselves, especially when you have other sources of income.

I haven’t really reached any conclusions – I suspect the answer will be that I cut back on the free stuff, but I doubt I’ll give it up. I know for a fact that I won’t be taking any new free gigs (I’ve only taken one new free gig in over a year, and it’s one that’s worth doing due to status in my opinion, though the panel yesterday would probably argue that I shouldn’t).

An odd place to be, and a huge topic for the coming months. I have a big call to make.

It’s been an interesting start to the year. I’ve put in A LOT of groundwork over the past two or three years in Ireland, but so far in 2012 it’s seemed almost too easy. Two very big jobs have fallen into my lap through networking. One of them didn’t even involve me making an approach. That’s been an amazing experience, but if I’m honest, I have to admit that I’m still learning about pitching articles.

That’s not to say I haven’t learnt something along the way. I’ve relatively recently got in to the habit of putting useful links in pitches, keeping them as concise as they can be whilst still getting the idea across, and of putting the key point in bold so editors can be read extremely quickly. I can get sloppy, though, especially with editors I know well, and I know respect my word. I need to work on that, and make sure the pitches grab them enough to get the assignment in the first place. I’ve had a couple where I’ve had an email back saying basically ‘flesh it out a bit better. I don’t really get the concept’. I need to avoid that.

Despite the work overload, I want to keep moving forward, so I’ll be following one of the panel’s suggestions from yesterday and pitching to someone new every week from now on. It’s not going to be easy – I’m already well aware of how rejection-heavy pitching can be (though I haven’t experienced shouting down the phone like Patrick described), but I need the practise, and to expand horizons. I think I’ll apply one other rule, too: I’ll only pitch to places that would feel like career progress. Otherwise there doesn’t seem a whole lot of point. Still, I’ve learnt a lot in the last few years. Just not quite enough yet, and hearing pros talking about it really helped.

Journalism as a Multi-Media Discipline

I guess in one way I already have my other outlet, in teaching, but this is something I’ve never really looked into at all. I’ve been on the radio a couple of times and featured on some podcasts, but for me writing has always been just that – interviews, features, reviews, opinion pieces etc., but not really a multi-discipline thing. I’ve met a lot of people who are very much the other way, and they’re great at it. I probably need to find another way to get myself out there (spot the time constraints pouring in)…

The problem is what? I’m not a DJ. I know a lot of music writers do that, but it’s just not for me, and I don’t feel the need to pretend. I don’t really feel particularly comfortable on the radio, and I can’t take photographs to any great level. I do have a music blog, but it’s largely stuff published elsewhere, and I don’t really push it (though that’s going to change soon). I don’t particularly feel the need to open a record label (nor can I afford it, time or money wise) and anything too time-consuming at this stage would probably (rightly) anger my lovely wife.

Most of all, though, I’m just delighted to have a forum for all of this stuff, and to hear the thoughts that swirl around my head on a day-to-day basis spoken out loud. I, too, am always looking to expand my bag of adjectives. I also have my publications/ editors I just won’t write for (Jim O’Carroll’s were hilarious, but I’ll keep them to myself), and my days when I wonder whether I should be doing this at all.

Over all, though, writing’s been a great experience so far, full of memories I’ll never forget. I’m going to try and take a written glance at every Dancing About Architecture for the next few weeks. The self-analysis will help my sanity, I think.

And as I’m sure a few of you are curious, Dancing About Archiecture? It comes from this quote from, well, according to the Internet, a whole host of musicians. I wouldn’t like to hazard a guess at the true origin: “writing about music is like dancing about architecture”. In a sense, I guess its bang on, but that’s half the fun of it!