How marketing originality might just save our smaller record labels.

Dublin’s Richter Collective form an exhilarating, exuberant stream amid the very lifeblood of the Irish music scene. Long as the core of Ireland’s wonderfully fruitful heavy indie/ math rock movement, the collaborative label has been affiliated with some of the top Irish releases of the last few years;  the likes of ASIWYFA, Adebisi Shank, The Redneck Manifesto and Not Squares. Like many of their contemporaries, though, the very fiscal survival of Richter Collective is trying. You could argue that if a business isn’t financially viable, it isn’t a business. On the other hand, if a label as popular and compelling as Richter can’t find the money to keep the tunes rolling, what hope is there for the rest of us? There had to be another way.

Unveiled in early 2012, Richter’s ‘Friends Of’ project is the brainchild of Michael Roe, and seeks to use the label’s loyal fan base as a mutually-beneficial financial refuge. The difficulties, according to Michael, are simple: “The main problem is cash flow. Before you start getting any money in, you have to pay for recording, pressing and PR. And then you have to wait a huge amount of time before you get the expenditure back from sales. We have a lot of money locked up in stock, but some of it won’t ship for five years.” There’s another option, but it’s not an appetizing one: “We could stop now”, Michael explains, “and we’d be fine, but if we want to invest in anything, be it producing new albums or special projects like vinyl, re-issues or deluxe editions, we need to have the cash outlay.” The consequences of those financial limitations are already being felt: Richter had to pass on releasing Logikparty’s up-and-coming debut album, simply because the timing wasn’t financially viable.

In Michael’s eyes, problems don’t truly stem from much-cited issues like illegal downloading. Instead, he refers to “the hazards of the industry. It’s just part of the business model, which could be improved by doing a few things more directly – approaching shops ourselves, for example – but that involves so much time and paperwork. For smaller labels it’s counterproductive. Distributors are essential, but slow the process down.” There are tricks, though: “our partnership with Sergeant’s House in the US has hugely increased exposure for our bands, particularly ASIWYFA. There’s an informal agreement with a Japanese label that helps, too, and we’d like more.” Publicity is great, clearly, but finance remains the major barrier. 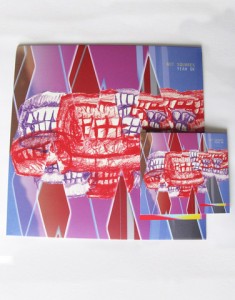 ‘Friends Of’ then, seeks to close that financial gap. For €100, fans get the full back-catalogue digitally, free gig entry all year, five CD albums, a Richter T-shirt and exclusive album previews. “Hopefully people will be into the idea”, Michael argues; “we’ve already had a great reaction, I think people know we’re not rolling in the cash. Just the physical stuff is worth around €50. We hope to develop the idea, change it up over a year or two. It might offset some other sales, but having the cash up front to invest is just far more valuable to us.”

Other labels have already experimented in similarly inventive concepts. The ‘subscription scheme’ – allowing label fans to bulk buy a set number of releases – is currently in use by labels like Boston hardcore outlet ‘B9’, who give online-only access to more than 200 releases at $30 per year. Eccentric Michigan label Ghostly International, home to the likes of Mobius Band and Matthew Dear, currently offers a $15/ month service for downloads of all new releases and other exclusives. The fine print might vary, but the theme is consistent: indie labels need to adapt – and find up front financing – to survive. By offering heady buy-ins to their biggest fans, they might have stumbled across a way to do so.

As published in the March 2012 issue of AU Magazine.