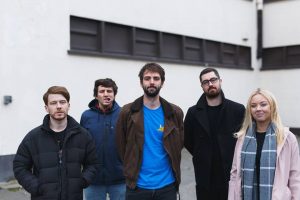 What are the plans for your record label in the longer term?

We have no long-term plans for the label. Our manager set it up purely as a means to put out our music. We had to come up with a name and unaware that it was going to be public knowledge we went for PK Miami. ‘Miami’ is a nickname we gave Peadar (our guitarist) a few years ago on a holiday in Seville. I quite like our label name now though, I’ve never been to Miami but I imagine Silverbacks would be a good soundtrack for a Cop show based in and around the city.

There seems to be a close link between you guys, Fontaines D.C, The Murder Capital and Girl Band – essentially the core of the grunge-y rock scene in Ireland right now. What’s going right with the scene at the moment, do you think

The exposure that Girl Band and Fontaines DC have got has helped turn more heads towards the Irish music scene which can only help bands like us. It also helps when there are guitar bands of a similar enough vein because they can help each other out by arranging shows together, sharing lifts, gear etc. With great bands like Post Punk Podge, Just Mustard, Hot Cops, Junk Drawer, Melts and Galants, Irish music definitely seems to be in a healthy place right now.

How much of an influence are Girl Band? There seems to be a race to pick up their mantle on the Dublin scene right now – not a bad thing, of course, they made quite a splash. Did working with Daniel put a little of their imprint on the sound?

As a band, we’re not too concerned with mantles or scenes. We’re more focused on doing our thing and being comfortable doing it. I’d say Girl Band and ourselves have some musical references in common but we’ve gone down different paths with those references. They’re also one of the best bands I’ve seen live and that definitely set a standard for which to aim. The reason we got in contact with Dan was actually because of the work he had done with Autre Monde. The drum and guitar sounds were phenomenal and a lot closer to what we were trying to achieve. Dan’s done great work with a lot of different bands so if there is an imprint there I’d say it’s a Foxy imprint rather than Girl Band’s.

I haven’t seen you live yet. What should we expect?

Shameless plug, find out and come to our headline show in Whelans upstairs with support from Galants and The Comstocks on December 8th.

You have some deeply layered guitars on your music. How do you put that together?

Kilian and I have found that the best way we write songs is for one of us to start with an idea and the other to finish it. Thinking of guitar hooks is something that comes naturally enough to us so what often happens is a demo will eventually have too many guitar layers. We’ll then restructure the demo and strip it back so that there are three or four layers. We then take the song to the band and between Peadar, Kilian and myself we work out the best way to play the guitar parts. Peadar and Kilian have their own distinct guitar styles and the two of them work together like a dynamic football partnership, Henry & Bergkamp. I’m more of a Mathieu Flamini.

‘Just In The Band’ is really full on from the start. Are you getting more abrupt as a band, or is it just a big, brash single?

We have songs similar to ‘Just In The Band’ in our live set but I don’t think we’re getting more abrupt. We were just really happy with the outcome of this song and we felt it was a good representation of what we sound like live. When it came down to deciding on the next single it was between this one and a much quieter song. In terms of the album we’re currently recording, there’ll be a few surprises in terms of style.

What are the plans for the future – will there be an album in 2019? What are your hopes for it?

The plan is to release an album we’re all happy with. We have about 2-3 more songs to record. It’ll also be our first physical release so I’m looking forward to that. We also hope are to play as many gigs as possible, including shows abroad.