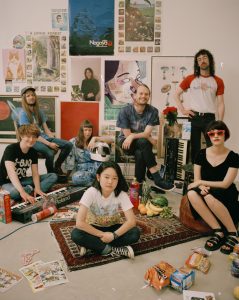 “I think everyone’s an internet band now,” Ruby continues. “We talk about it more, maybe. We all grew up starting bands on forums, punk bands and stuff, years ago. It makes for a few good stories.”

“We met over a period of about ten years, but all separately, and slowly. The music brought us closer, and it works for us. We didn’t play any shows until Soul joined us from Sydney, as the last arrival.”

“It was really exciting watching the hype build from afar,” Soul remembers, “though Australia was really sunny and I had to leave that.”

“I was confident when I came over because we have lawyers,” Noguchi jokes. “Domino came in before all that. Even at that point, we weren’t sure we were going to do live shows. We never thought we would all end up living in London, and then touring in France. It’s been a total whirlwind. Exhausting and crazy, and great.”

“We had to figure out how to do it all live in big group meetings, and figure out choreographs and stuff. Over a period of a few months, we figured out how we were going to do it. But everything felt pretty organic, like we’ve been given a problem and then just solved it.”

Superorganism’s debut album charted at number 25 in the UK, which just goes to show, sometimes the internet really is the best use of your time.