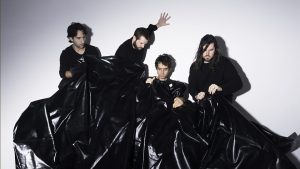 Financially, records seem to be a poor investment for bands these days. Are you dependent on touring? How do you feel about the situation?

Touring has always been our bread and butter. It’s pretty intense. We still sell records, but it’s mostly vinyl. By the time our first album came out years ago, the landscape was similar to what it is like today, basically free. So, it’s not like we ever knew it any other way as professionals. It’s just the way it is, you can’t really change it. I accept the situation. I also understand that 20 or 30 or whatever years ago if we were doing what we were doing in the age of selling records, nobody would have signed us to begin with. So it’s all good.

Are you guys comfortable tourers? Do you get the chance to connect with the places you’re in?

We have toured pretty hard for almost 10 years now. so we have seen a lot of places. You make it comfortable, you find your zone. There are some cities that we have most definitely connected with. There are others that we have played half a dozen times and never seen more than the same 3 blocks.

How does producing yourself change the feel of a record for you?

Right on. It’s a feel thing. You have more control and can get closer to the vision you have of the thing. I think it’s looser too, it’s almost more casual which makes the performances less precious (and so better). The kind of music we make is particular. We have developed a kind of language or logic to the songs, which we understand better than anyone else. So it seems natural to produce it too. It’s also cheaper.

What are these relatively small live shows, like the one in Dublin, like for you – do you feed off the energy of a small room, or find it strange? How do the crowds compare to back home?

I think we are most comfortable in small rooms. We’ve played all kinds and after a certain number, you lose contact with the crowd. We are a live band that definitely cut our teeth (and still do) in small rooms. I think it suits us better there to be honest. It’s a better show.

I’ve heard the live set is something you’ve adapted to take in influences like jazz. Is crafting a live set quite a distinct thing for you as a band?

We change it every night, and have found tricks along the way that work for the material. I wouldn’t say that we have adapted jazz influences per say… I’m not sure what that means actually. But crafting a live set is really important for the music we make. We are not going to wow audiences with one song, you kind of have to commit to the show and watch it unfold to fully get it.

Who would you like to be compared to, musically?

There are too many to name. I like too many bands.

You have a bit of a reputation for not particularly liking the PR/ talking to journalists side of music. Is this all a bit pointless to you? Would you rather we just listened to the songs and wrote about them ourselves? Can you even describe music well in words, in your view?

I think its the other way around. I think good journalists and music critics can be incredibly articulate about describing music, and it’s necessary for the art form.

There’s a relative lack of Canadian music making its way into Ireland, especially live. Are there other bands from out your way that would appeal to Suuns fans? Who would you recommend?

Accepting you’re relatively early in the album cycle, what’s next for you guys?