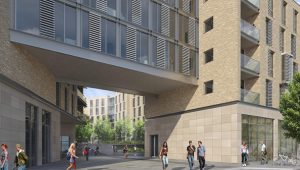 Lands Generally Bound by Mill Street (to the north), Sweeney’s Terrace/ Clarence Mangnan Road (to the west), Warrenmount Lane (to the east), the grounds of Warrenmount Convent (to the south) and no 10 Mill Street (a protected structure) and former mission hall.

Permission to omit Condition 20(b) – structure to be publicly accessible during daylight hours.

We would like to object to the change in planning conditions on the aforementioned development, Mill Street student accommodation, on the following basis…

(1) the building’s planning permission was granted on the basis of access to green space for the general public and an attempt to integrate the student community and the local community, as well as a public access through route. This was integral to the initial proposal, and at the heart of locals’ view of the development.

As Dublin City Council are no doubt aware, the large volume of student accommodation being built around the Newmarket area, where we live, is the subject of substantial discussion locally. The Mill Street site to which this application refers was controversial, and sold to the local community – despite being accompanied by a substantial increase in population density and being mainly aimed at non-permanent residents – on the basis that the accommodation would be an integrated part of the community, allowing access to the site for the people who already live in the area.

On completion of the facility, the owners of this site immediately erected large gates, preventing the public from accessing the site. They did so in clear contravention of the initial planning agreement, and it seems abundantly clear from the timing of this set up, in place from the beginning, that it was never intended to grant public access to the outside areas of the new development as required. This application follows a number of complaints with regards to the blocked access, and seeks to change the rules on which the construction was based, against their own stated intentions. It does so rather than address the genuine expectations of the public with regards to access to green space, which is already extremely limited in the area.

This causes a number of concerns locally. For one, there are several more student accommodation blocks that have been granted planning permission on a similar basis in the immediate area. To allow the owners to appease the local community on integration and access ahead of construction and then flaunt planning law, and seek permission to change the rules when they are called out on this behaviour, seems to set an extremely poor precedent.

It shows complete disregard for the legitimate expectations of locals who have followed this planning process and held back on objecting based on the proposals as originally put forward. To accept this change would send a message to the organisations involved in this and other developments that the public amenity side of their work is not important, and that they can simply falsely offer development access to appeal to locals, and then seek to change later to suit their purposes. It also fundamentally undermines the original concept of integrating this temporary residential accommodation into the community, which was sold as being at the heart of the plan. Instead of taking any account of local integration and access, the owners have chosen to physically barricade themselves from the local community, up until this point against regulation, and are now seeking to bring regulations they have never complied with back to their position. We see this as a highly cynical ploy.

The reason stated for the change of planning permission, in essence, that a review of security found the need to be gated for the safety of residents, only serves to make further mockery of the stated intent of the company to integrate into the local community: they have never complied with the explicit requirement to do so, and now state that their residents need to be separated from the rest of the locals for safety purposes. Given the immediate area has not changed substantially since the application was made – if anything, it has improved – and the gates have never been open in order to assess what ‘new’ risk they imply they now need to address by closing the gates, it’s hard to take such a suggestion seriously.

We will be extremely disappointed if Dublin City Council doesn’t enforce planning permission as originally granted, and require the owners of this substantial new local development to integrate into the community as promised. They should be forced to uphold the commitments they made when construction was agreed, promises they have so far thoroughly reneged on, and should not be allowed to sidestep planning regulations in what seems, to us, a transparently cynical and manipulative way.