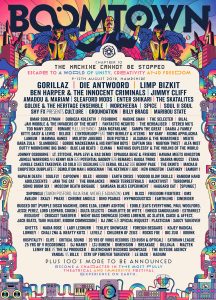 What more could you want on a Sunday afternoon than a half-cut sarcastic man from Bradford singing about cat-generated sources of power, hating babies and stealing his granny’s drugs. This lad had me in stitches, tucked away on a tiny stage off the Old Town drag and throwing sarcasm at the mud-drenched, tight-leather clad masses and one man so out of it that he had to be given a very lounge chair to ensure he stayed upright. All round excellent.

Soulful slow-build summer songs in the middle of the weekend’s worst downpour, played to perhaps 500 people on the main stage because, presumably, everyone else was trying to stay dry. Absolutely no regrets, though. This was one of very few outings I made to the main stage, and Morcheeba brought sunshine in their own way, with ‘Rome Wasn’t Built In A Day’, ‘Friction’ and ‘The Sea’ perfect summers-gone-by sounds. Skye is a fantastic frontwoman, too, charisma personified.

This guy is just perfect festival fodder. Thought-provoking songs about the chicken industry, bringing his dad on stage for his birthday, lots of laughs through a distinctive wit and memorable mid-song quips, plus a little bit of real-life romance in his song for Jamie and Lilly. What a man…

I’d never come across this group of brass-dance nutters from Hamburg before, but what an intro this was on Friday morning. Flamboyant trance-like beats reproduced using tubas, saxophones and trumpets, touching on lots of dance staples along the way. Seriously colourful live, in full old-school military garb and dancing in a way that would definitely get them court-martialled. One to keep an eye on.

A French dance-pop band playing only their third show in the UK, Deluxe wouldn’t normally be my cup of tea at all, but they totally won me over with upbeat, extremely danceable pop in the inch-thick mud. Easy, accessible fun on a Sunday afternoon, a real pick-me-up of driving cheese that was impossible not to love.

Nope, I’m not kidding. I’m well aware that bigging up Limp Bizkit is not the done thing in music circles, but when it’s good, it’s good. Massive turnout for this, they seemed really chuffed to be there, and they took the roof off the place with mammoth choruses and plenty of stage-side fire. They remind me quite a lot of The Prodigy and Rage Against the Machine live. Also, Break Stuff is the perfect angry song. A whole lot of fun.

Our detour from Gorillaz after that sound fail brought us to a tent called The People’s Living Room, behind a door that had been closed every other time we’d strolled by. Inside, we found an incredible jazz/ soul singer, Ruth Royall, and what seemed to be an ad-hoc band (though they were excellent) delicately wowing the place. A real privilege, and one of those festival finds.

This lad’s been around a lot of Irish festivals over the years, and I’ve never got around to checking him out. In hindsight, that was a serious error of judgement. Omar Souleyman kind of strolls around the stage clapping politely whilst putting out these massive bass-heavy mixes of Middle Eastern dance music with intense vocals layered over the top. I suspect some of the shtick is a little bit put on, but it doesn’t detract: some of his stuff is produced by Four Tet, which tells you all you need to know about how good he is…