Ask the deepest philosopher or the cheesiest pop star: we all agree that the future’s yet unwritten. Or, at least, we all accept that we can’t know which of the countless possible futures will come to pass. That said, some fantastic books – whether based in fact, or entirely fictional – try their very best to do just that.

Whether these turn out to be the work of a modern-day Nostradamus or have more in common with an author betting on sport, each of these books offer brain-tickling insight, and in that alone we find our value. Some attempt to academically ask “what happens if we all die tomorrow?” Others fictionally examine the role of virtual reality in our lives. With each insightful in different ways, here are my top books examining future’s blank pages…

The future, we’re often told, is Chinese. With the country still formally under a communist structure with distinctly capitalist overtones, however, Beijing’s cultural present can be difficult to decipher for outsiders, let alone its likely futures. David Shambaugh is a leading scholar on the politics of the Eastern powerhouse, and looks mainly at economy and society in this 2016 book, briefly exploring a series of possible outcomes based on the state’s political behaviour.

Debt, the elderly, the environment, banking transparency and regions like Tibet and Hong Kong are just some of the Chinese ‘bottlenecks’ addressed here, and while Shambaugh’s brief text might not come up with particularly conclusive predictions for any of them, it does examine how China could sit in a decade or two, from problems with the development of a less-factory and more service-based economy to the likely consequences of differing support for relatively hardline leader Xi. Written simply but from a place of transparently in-depth knowledge, we’re given a glance at the diverse potential “roundabout exits” – be they trade or conflict – of a country that’s only getting more important. 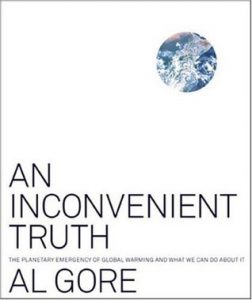 There are many, many more up-to-date and scientifically rigorous takes on climate change than Al Gore’s 2006 work, but he of the famous 2000 Florida hanging chad incident still offers one of the most accessible. An Inconvenient Truth lays out, simply, the scientifically expected consequences of behaving the way we currently do (or rather did, though the tense change doesn’t do a great deal to help matters in this case).Simple impacts like rainfall, rising sea levels, ocean currents and disease vectors are laid out next to maps of ice cover and diagrams of rocketing CO2 levels and, yes, the odd story about the former democratic Vice President’s past and his personal, Nobel Prize winning climate change endeavours. Assuming you have faith in the gist of the diagrams and predictions – and most of those who work in the area do – their stark presentation alongside pictures of climate consequences says all you need to know about our planetary impact. Yes, it’s an educated guess, but there’s such power in the presentation.

Weisman’s extremely well-researched futurescape argument is different: not generally a moral take, but a literal examination of where the world would head should we simply cease to exist. He doesn’t hover too long on the reason for our disappearance, but instead focuses on the physical realities: the repopulating of our cities with migrating animals (which evidence suggests would happen in short order); the crumbling of skyscrapers; the residue of our last remaining traces. Some aspects of human existence, it turns out, would crumble shortly after we all physically departed. Odd as it is to hear how your city might be unrecognisable in mere decades (a concept for which Ukranian nuclear wasteland Chernobyl provides ample evidence), the truly shocking aspect here is the vivid descriptions of what we’ll leave behind for a long, long time.For that, there’s the obvious, like plastics, and the thought provoking, like the expected extremely lengthy survival of the art we sent up with the Voyager, which might exist after the sun. If you’re feeling particularly morose, it’s hard not to soak in ‘The World Without Us’ and wonder if we’d be better off simply slipping from our mortal coil (such a movement exists, by the way – that’s in the book, too). Having said that, dogs and farm animals wouldn’t last long without us… 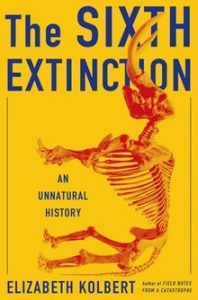 A broad but largely biological take on human impact, Elizabeth Colbert’s award-winning book focuses in part on opening our eyes to the species currently being lost to the planet, but also explores the psychological nature of humankind, and our futures. Progressing throughout the text from informative but broadly accepted fact to darkly and depressingly predicting the future twists and turns our planet will take, Colbert brings us along on her own research trips and explores human impact across the planet along the way. The key line acts like a slap in the face: look around you. Kill half of what you see.There have already been five periods of extinction, of course, hence the title. The difference, Colbert answers as she flits through her experiences of the suffering of tree frogs, coral reefs and elephants, is that the disaster this time around is all about us. Be warned: this might not be intended as a horror book, but readers have frequently reported it keeps them up at night.

With America’s future so hotly debated in 2017, The Mandibles is an apt examination of what might for a country at its worst. In telling the story of a well-to-do family, Lionel Shriver’s book goes down a dark rabbit-hole containing a fiery combination of mismanagement and inequality. The American economy collapses. Water becomes an exceptionally precious commodity. Racial tensions are ramped up, hyperinflation takes hold, and [spoiler alert] eventually simply remaining in your own home instead of eking out an existence on scraps in the local park is toxically difficult.The premise takes much of its inspiration from the seminal ‘future’ fiction books, like 2001: A Space Odyssey, or 1984 (both of which are quoted in the text): taking on the idea that books about the future are not really about what might happen, but what we fear might happen. This is appropriately sharp satire for today, then, in the bringing to bear the devaluation of the dollar to the point that it’s more appropriately used as part of a visit to the bathroom (and subsequent haggling culture), or the sentimental clutching of family keepsakes against an enforced confiscation of all gold. A very 2016 release.