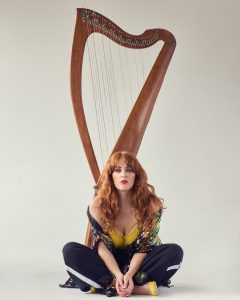 “I was living two lives in Ireland,” she remembers. “I was doing the trad thing, but also trying to establish this original work. It was hard to manage both of them, so I decided to start being who I needed to be; to make it work in London. From the get-go, I was the hip-hop harpist over there.”

“It was a very purposeful plan. Even the fact that we’ve done two Irish tours now, I’m really excited to finally put something out there. The EP became my life. I thought once I’d recorded it, that was the big bit part of it done. No. It’s the mixing, the producing. We recorded nearly everything in a weekend. Five days for all the recording, and then two months for everything else. The time and the money is in the rest of it. I’m over the hill of it now, which is great, but you have to get obsessed with it, otherwise it doesn’t happen.”

The EP was essential to Canny making the breakthrough, however, and builds on a clever marketing strategy that’s happened largely on the web.

“With building things online, it’s important now for me to get my ‘artist’ side out. People start to know you for covers. It’s great that they know you, but you need to get that side focused. Now, they’ll look me up and find a load of covers. It’s time to get the original stuff out. With that stuff, anything I write is always personal. I don’t write anything I don’t know. Some people might say I’m too vast in my themes, but how could it be. It’s all me.”

“The first single will be called Freedom,” Canny continues, “and I wrote it with one of the original members of Iron Maiden, which is insane. We might be the most unlikely duo in the world, me and Tony Moore. He loves what I do and we really bounce off each other in session. I wanted to represent a new age version of those songs we had back in the age of new age rule. Back then you weren’t allowed to speak the language, you weren’t allowed to dance the dances. It’s why our culture now is so strong, that’s the silver lining.”

“We had a wealth of songs that pretended to be about women, but were actually about Ireland, like Roisin Dubh, which was the first song I ever learnt as a child. Freedom is my new age version of that, referencing what we’ve come through, but also where we’re at. It references Repeal the 8th, for example. I’d be very pro-choice. It’s what we’ve done, but also what we still have to do. It reflects my Irishness.”

Being outside the Irish circuit, in fact, has been strange for Canny, though she appreciates the doors the UK has opened. “They don’t see me as a stereotype. You step up on stage with a harp here and people have a certain expectation. They don’t expect me to start looping and rapping. In the UK they don’t have that expectation, so I can play around a bit more.”

“It’s been interesting in London,” she continues. “I think some producers were looking at me with the harp and not knowing what to do with me. But then Ed Sheeran did Galway Girl, and suddenly they’re into it, they’re all ‘bring the harp, bring the banjo’. He’s really opened the door for me. His father came to one of his gigs actually, the other day, and said he’d have to introduce it to Ed. I did a fusion of Beyonce and Christy Moore, and John Sheeran said Ed would love it, that Christy Moore is his biggest inspiration and Beyonce is his best friend. It was amazing.”

Canny’s roots still sit in her past, though, and in the trad she grew up on. “I love that I have traditional at the foundation to it all, and I love exploring it. The looping came into it because I was moving to London and couldn’t play with my band. It was an attempt to create the band sound, and it’s not the same thing, but it’s opening doors for me. I like pushing out the boundaries of what we’re familiar with.”

Today, you’ll find Canny heavily engaged in her own stuff, then, but also grabbing an online reputation in covering the likes of Metallica (her version of ‘Nothing Else Happens’ alone has a million views since January), Beyonce and Christy Moore. She’s also releasing a song every week this year, a memorable blend of originals and covers.

“It’s been a very purposeful plan to get a following up. I’ve been able to do two Irish tours now without releasing anything,” she tells us. “It’s been incredible. It’s taken a long time to get to the EP, but I do have an album’s worth of material, we just chose the first four for now. There might be another four tracks before the New Year that will make up an album. I’m very excited to finally get something out there. It’s time. It’s become my life.”

Lisa Canny follows the release of debut single ‘Freedom’ with an Irish tour, including a show at the Chalk Venue in Swords of May 31.