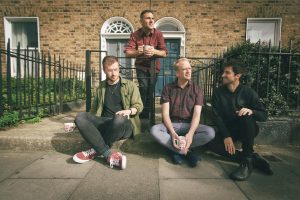 “It was difficult, and scary,” McGuinness tell us. “You don’t get a lot of guarantees in music, and this meant putting aside tours, things like that, to start again. We have certainty with this album, though. I believe it stands up, and shows who we are.”

“There are songs with no guitar. Songs with beats instead of drums. There are songs that are ‘built’ rather than played in a room, and that adds another layer to things. We worked with Tom McLaughlin, and he ended up being more of a collaborator, he plays on a few of the songs. We also have two or three we did with Richie [Egan, of Jape], one of which didn’t make the album. I think we brought the best out of each other. It’s reflective of where we are now, we’re at a point where it’s so natural, and we work so well together. There’s some fighting over riffs, but that’s about it!” 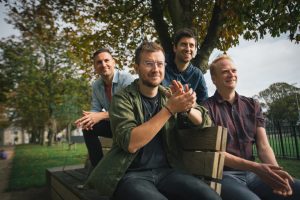 The objective with the new songs was reflecting the band’s newfound responsibilities – essentially being true to what their lives are today. “We wanted to write songs that reflect that movement into adulthood,” McGuinness explains. “The independence, the fear and anxiety, but also the joy, comfort and self-reliance. We took that approach to the songwriting. There was no finding a cool sound and building a song around it.”

There’s a fantastic freedom that comes with Delorentos independence and insistence on following their own path. That flexibility shines in the way they approach touring and music, too: on a recent tour, they heard of a couple getting married down the road, with their track ‘Waited For You So Long’ as the first dance. The band got in touch to see about playing it live at the wedding, and delivered something really personal.

Lacking a big PR budget, they’ve spread largely by word of mouth. It’s a testament to the quality of the tracks, then, that tours have taken Delorentos to Mexico, Russia and across Europe as they’ve grown, album by album.

There’s also been a lot of interesting promo activities, from the rootsy decision to go back to small-venue tours ahead of the album launch, to the pop-up shops and band magazine that came along with the release of 2012 album ‘Little Sparks’. The pop-up shop concept became quite common after that album’s release, so this time around Delorentos decided to funnel their budget into videos, as well as some in-store shows around the launch of the album, and their first ever listening party. The latter includes a live chat with Stuart Clarke of Hot Press, and signed vinyl copies of the new record for every attendee. The progress, for a band that formally split and ‘played their last show’ back in 2008, before deciding they missed things too much, is astonishing.

“We’re not Snow Patrol,” McGuinness jokes. “We’re not about to tour the world playing the same songs every night, and we know that. But we mean a lot to people, and we have to respect that and put everything into what we do. We played five nights in small venues recently and there were some people who came to all five nights to hear the new music.”

“I’m confident that when we look back on this album we’ll look back knowing we gave it all. I guess it’s Delorentos mark three. We had mark one with the first two albums, that I feel kind of came together as one thing, and mark two with ‘Little Sparks’ and ‘Night Becomes Light’. This feels like mark three, because of the way it’s produced, and the way we’ve put aside the idea of writing radio play tracks aimed at 18-20-year-old. That age group is way over-represented in music, and we don’t want to write any more songs about meeting girls or drinking with your friends.” 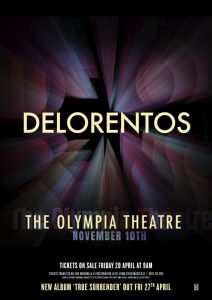 “It can be difficult to draw a line, though, in terms of all the personal stuff,” McGuinness continues, talking of regularly singing ‘Home Again’ – a song about learning his partner was pregnant – to his young daughter, but avoiding the ‘flip-side’ track ‘Am I Done’, which examines the anxiety he felt around becoming a father.

“I met this DJ the other day who said she can’t think of adoption without thinking of me, and I’m not entirely comfortable with that,” he said, referring to the track ‘Petrerdu’, which examines McGuinness’ adoptive past.

“I want to be able to take the DART or go to the pub without being asked to talk about music, or take photos. Some of this stuff is very personal, and it’s what makes it us, and that’s important. But it also means people know things about us. It does feel uncomfortable being asked for photos when you’re out shopping with your newborn.”

Privacy has been odd even in a musical sense for the band. “Once we announced the album title and the tracks, we had to take measures to make sure they weren’t hacked,” McGuiness explains. “We added punctuation marks to the names so they couldn’t be searched down so easily, as it’s really easy to do once people know what they’re looking for. I guess everyone’s dealing with this privacy stuff at the moment.”

Not that Delorentos will be shying away from personal explorations in their new release, as debut fifth-album single ‘In Darkness We Feel Our Way’ – the only survivor from the scrapped Vineyard album – shows.

The result of that personal touch has been an intensity of connection with fans, one that’s clearly working, as a debut headline show at the Olympia Theatre, taking place in November, shows.

“One of the big gigs in our early days – while I was still learning to play electric guitar instead of acoustic – was an Olympia gig with E66 (now Le Galaxie), Alpha State and a few others,” McGuinness recalls. “It’s amazing to be headlining the Olympia.”

“What’s been really great in recent years is being able to do so much of what we want to do. If you’d told me as a fifteen-year-old that I’d be able to live my life making music, playing gigs and DJing [McGuinness is a semi-regular presenter on Radio Nova], I’d have thought that’s the most amazing news ever.”

“We burst ourselves with this, we left everything on the floor of the studio. You see a lot of bands quitting, and putting out press releases about how hard it is in the music industry now. They’re right, it is tough. But these are also joyful times.”

True Surrender is out now.