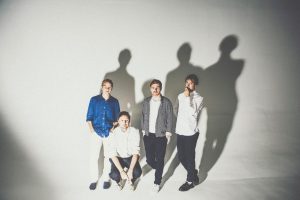 Latest album ‘Marbles Skies’ has been a long time coming. “By the time it comes to release you’re just excited to have it out there,” Neff says of the launch of their third release. “It’s been six months finished, and working on other stuff, like videos, and how to play the tracks live, and it’s more of a relief than anything to actually have it out there.”

“Ideally we’d like to put it out the next day, but things don’t really work that way, though I did come across a label that does that recently. We actually wrote this one apart, in a sense, and that worked quite well. It was quite dynamic at the beginning. We got Anna [Prior, the drummer with Metronomy] involved. Dave being away from us was a bit of an accident, but in a way it gave us all space, and we came at each track with fresh ears, which made things slightly different from before.” 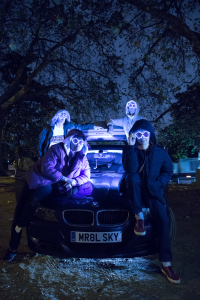 There’s a sense, in fact, that Neff wasn’t all that happy with Django Django’s second album, which saw the act shift to the ‘big time’ but perhaps become a little less themselves. They moved from a very-much bedroom recording set up in their 100,000-selling self-titled debut, to a high-end studio production in sophomore release ‘Born Under Saturn’.

“You can say you don’t care when the critics aren’t as into it,” Neff says, “but that’s only so true. If someone pummels it, it’s not like you can go out and just fix it the next time. Nothing’s ever going to be to everyone’s taste and you kind of have to go with your gut. But I don’t really believe anyone doesn’t care what people think of what they’ve put so much work into.”

“We work with an amazing label, and that gives us real freedom,” he continues. “At the time we started out, they were the only label willing to offer us a decent contract, but Because Music have been excellent, they’ve supported us without trying to influence too much what we do. I’ve heard a lot of grumbles about labels interfering in music, but they have a really varied roster and are into really different stuff. We draw from everywhere without a real common theme. We’re like musical magpies. So it kind of makes a lot of sense for us.”

Based on the reception of its early singles and the first few days of the new album, it seems likely the Marble Skies will be the popular return to form that Django Django were looking for. The critics are certainly infatuated, if continuing a charming and convoluted struggle to pin down exactly what this band actually are.

“For us, it’s mainly about moving forward,” Neff says. “We’d hate people to feel that we’re just going over old ground. I think we had this idea that we’d be a little cult band playing to 150 people each night, forever, and that would suffice. Once it took off we had to think a little differently, but, things went beyond our wildest dreams.”

Django Django play the Tivoli Theatre on Francis Street on March 2. Their acclaimed third album ‘Marble Skies’ is out now.