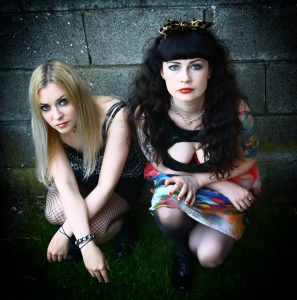 Punk two-piece Vulpynes are only three singles old, but already look a good bet for Dublin music’s next big thing. So what has the lairy pair making waves in London and Berlin?

DUBLINERS VULPYNES had an inauspicious start. Formed after drummer/ vocalist Kaz Millar placed an advert on Boards.ie looking to form a band (future partner in crime Maeve Molly McKernan was the first to reply), the post eventually resulted in a four-piece. They played only covers, and lasted mere days.

Millar and McKernan had felt something click, though, and after a brief search for a bassist, decided to start making original material, and to go it alone. Their sound takes much of its inspiration from the 90s. It’s raw, nodding distinctly to acts like Hole, Alice in Chains, L7 and Soundgarden. Riddled with reverb, abrasive and fearless, it comes from a band dynamic that was very much full speed ahead from the off.

“We started off really determined,” McKernan recalls. “We were just eager to play, and took any gig we were offered. It’s a mentality we’ve kind of continued with. We want to play live, and the more people see us, the more people know us. It’s a word of mouth thing. With the UK shows, we reached out to promoters the first time around, and since then we’ve been invited back to do shows. We’re going to Berlin this month, too, and back to the UK in 2018.”

While relatively underground at least for the uninitiated (it’s based largely around a small handful of labels and venues, though there are surprisingly numerous bands), Dublin has long had a powerful and close-knit punk scene, based around lairy nights out, an enticing community spirit and supportive culture.

“It’s a really friendly community of bands,” McKernan explains. “They really want to help each other out, and they love music. It’s that community where we feel at home, and we’ve found it so welcoming. Everyone’s so genuine, with a real community spirit with no backstabbing, and we love it.”

While they connected specifically in order to form the band, the stories of Millar and McKernan’s journeys with punk are surprisingly similar. McKernan’s mum introduced her to bands like L7 and Hole at a young age, and now shows her support for Vulpynes by drawing, producing stunning illustrations of the pair as skeletons, or foxes. Millar’s older sister channeled Nirvana and Alice in Chains into her life. 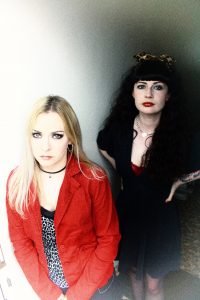 Much of the band’s creative spark now happens in a practice room in Whitehall. Shared with several other bands, the space is “too hot in summer and too cold in winter,” but enough to allow the pair to work. The songs come together quickly.

“We normally write lyrics first. I’m constantly scribbling verses,” McKernan tells us. “Then riffs, and Kaz adds her magic, cutting through it. That we’re done in a couple of hours is a nice uncomplicated reality for a two piece. I like my guitar to sound distorted, but not too hazy, not too muddy.”

So far, the singles have been a stark statement. ‘OCD’ is a brash if oddly-positive ode to the condition, with abrasive riffs and throat-battering lyrics. ‘Terry Said’ is a little less direct, written about a stranger in a Dublin bar, with almost sneeringly dank choruses. The newest release, ‘Silica’ is the best yet, unapologetically in your face and bitter, with deep-toned chords that almost twist McKernan’s guitar into a bass-like snarl.

“The two-piece thing does seem to be kind of fashionable,” the pair admit, “but we never planned it, it’s just how things worked out. I love the White Stripes, because they’re not afraid to just write good songs, they never try to fill up something that isn’t there. They’re just good songs. We’d relate more to them than someone like Royal Blood, who just sound a bit overproduced to us. We’re really as raw sounding as possible. That’s what we want to do, and it’ll be the same when we come to doing an album.”

The future is bright for the pair, and in the short term will see the boisterous two-piece playing extensively over Christmas and New Year, including a Hot Press showcase in January.

“We have a few plans for the New Year, but we don’t really plan too far ahead,” McKernan tells us. “We’re always very busy, but we like it that way. We noticed the other day that it’s been almost six months since we put out a single, back in July, and it’s just flown by. We’re going to try and get something physically released next year. The next step is an EP, probably in the first quarter or so of the year, and probably a video, too.”

In passing, McKernan mentions two key chords on which she bases much of her guitar part. It’s an aesthetic, of course, but also distinctly punk rock, about being raw, direct and sticking to a tone as much as delivering a melody. The passion for their project is clear to see in everything the duo say. As a well-known twist on the old saying goes, ‘love is like punk: not dead’. Whatever the pair do, it’s sure to be done with passion. The result is one noisy, relentless party.

Catch Vulypnes at the Dando Christmas Sessions, Fibber Magees, December 30, or at the Hot Press Tramlines show on January 15.