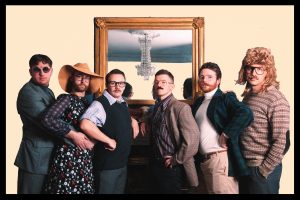 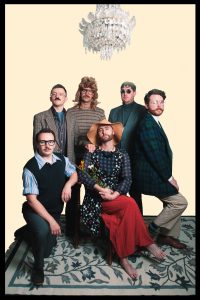 In a sense, with Irish hip-hop currently at by far its highest ever ebb, Super Extra Bonus Party are a more natural fit for today’s scene, with Elsted telling us that current stars Rusangano Family “made me wish Bonus Party were still going every time I saw them.”

“We’ve listened to hip-hop forever really and it’s still a very integral part of the band and one of our main influences,” Stephen ‘Fats’ Fahey adds. “It’s a very natural part of our arsenal, so we’d be producing tunes with a hip-hop influence regardless of the climate for sure.” The climate, though, is very likely to be still more accepting than last time around, and that can only be a positive.

That writing process has come very naturally, with Fahey describing the progression as less challenging than last time around, at least so far.

“Mostly It feels a lot easier,” he explains, “and I think that’s going to be reflected  in the music. We’ve developed a lot both as people and as musicians. Years ago we avoided difficult conversations. We avoided uncomfortable confrontation and the necessity of critical analysis.”

“Our approach back then tended to be to identify space in a tune and immediately fill it with my amazing part. Now we’re talking so much more about our music and trying create and maintain space, facilitating each others ideas and encouraging each other as much as we can.”

New single Switzerland, naturally, went through a slightly messy, iterative process, as has much of Bonus Party’s work. The result is a glitchy, bleeping melody fused with power chords and fresh, echoey vocals.

“Switzerland was one of the first demos that were floating around when we first started working on music again,” Elsted explains. “As per usual with us, it started off as a totally different song.”

“I think it was meant to be more of a housier track with some guitars added, but we stripped it back and all that was left that we actually liked was the little synth arpeggio, which is essentially the spine of the song. It went through various permutations with other members veering between trying to get rid of it altogether (not naming any names!) and adding some valuable constructive criticism or suggestions for the sequencing. We had been rehearsing it for a while before we finally got into gear.”

“The drums were done in Herbert Place Studios in Dublin with our long-suffering producer Sean Corcoran, with the instrumentation and vocals all done in his studio in Rathmines. Lots of ‘Ooh I’m not sure about that’ and ‘We are definitely not using that synth it sounds like an arse’ later, we had the bones of the song. The mixing process was surprisingly easy, but I reckon that was because Sean wouldn’t let us near it. Probably for the best. We’re so delighted with how it turned out.”

Switzerland is not to be a one-off. The band are already announcing shows, and an album – jokingly working-titled ‘Led Zeppelin 4’ – is on the longer-term horizon. “The album is still our yardstick,” Fahey tells us.

As for that big moment at Vicar Street all those years ago?

“You have to understand that we were total outsiders,” Elsted recalls. “We were relatively unknown to critics and bands because we had essentially come from nowhere. I remember being excited to play in Vicar Street, really relishing it. Being able to hoof around and have fun with my friends on a national stage was an indescribable feeling. The win was the win. We can’t account for why we were chosen, we were just blown away by it.”