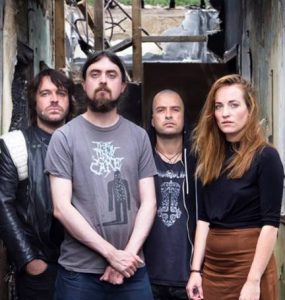 Of course, trad stylings are not widely seen as a natural fit for the larger stage, but then again harmonies are far from common in Irish trad, and being signed to iconic indie label Rough Trade is normally the sign of an intensely fashionable indie act. 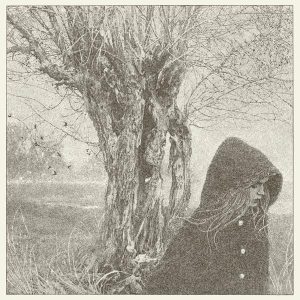 “Rough Trade have been branching out a bit recently, and the main criteria is whether the boss, Jeff Travis, likes something,” Lynch explains. “It’s been a bit of a change; our first album was recorded on equipment normally used to archive trad music, so not exactly cutting edge. Obviously the [new record] ‘Between the Earth and the Sky’ wasn’t.”

“But it’s been really good with Rough Trade. We’ve asked for a few things, like not having the barcode on the vinyl art work. They had to make the record a double vinyl release as we like to write 12-minute songs, and that kind of gets in the way of having a normal single vinyl release. But they’ve been really great about that kind of thing, they don’t try and influence what we do.”

The fast rise has changed the band’s allure, too. “We’ve found as we’ve moved on to a stage, different people have been interested in us,” Lynch tells us. “It’s not really a conscious change, it kind of happened naturally, but we get a different kind of audience.”

Much of the rise of Lankum, strangely, came under a different name, ‘Lynched’. It goes against virtually every rule of music PR to change the  name of an established act, and generally happens only due to copyright issues. Lankum made the change after that Jools Holland appearance, but as their audience expanded, the Dubliners felt the renaming – to a name referencing the traveler folk ballad ‘False Lankum’ – was a necessary decision.

“We had a few promoters who were not happy, as it inevitably meant people didn’t recognise who we were on posters and stuff” Lynch tells us, “but we felt we had to take responsibility. As we started doing bigger gigs abroad, the first thing people see is the name. Irish people wouldn’t really think of the association, but in parts of the world like America, ‘Lynched’ (a reference to Ian’s surname) is a bit too close to the persecution of black people. It was a difficult decision, as we were established under the old name, and we did see a dip in audiences for a little while afterwards, but we really needed to clearly distance ourselves from that association.”

That particular concern faded fast, and Lankum have gone on to win over fans with every tour, every release and every new melody. But for all their success on bigger stages, the band still regularly drop back into the folk scene, both for the love, and the inspiration. Lynch tells us that the band spent over an hour playing a trad session near The Spirit Store before their own gig in Dundalk recently, and in typical style, it sounds like he enjoyed the experience more than the gig itself.

“I’ve always felt that’s something that’s missing for guitar bands, that once they’re big, they never seem to go back to that small room, that intimate setting,” he concludes. “This will always be part of our lives.”

Lankum play Vicar Street, Dublin on December 9, with support from Lisa O’Neill. Third album ‘Between the Earth and the Sky’ is out now.