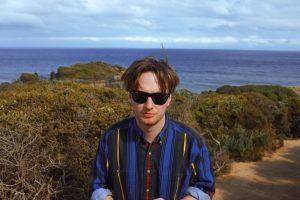 From (kind of) faking his own death to releasing a single album with enough tracks to fill an entire radio show, No Monster Club’s Bobby Aherne recalls a career that’s hard to define.

BOBBY AHERNE doesn’t particularly like convention. As a core member of the wonderful Popical Island collective, a loosely formed Dublin record label that thrives on collaboration, his main outlet No Monster Club has been flirting with the fringes of the Irish music scene for some time, performing lyrically sharp bubblegum pop.

His themes are broad, their coherence, perhaps, coming from the fact that No Monster Club is emphatically not about the conventional pop subjects. Bursting with colour, Aherne’s tracks explore Africa, wish retirement on an artist he’s sick of hearing, riff on the buzz of charity shops, and happily harmonize on drinking and smoking in parks. In his latest project, he’s releasing a short EP every month for all of 2017.

“I didn’t want to do a whole album again, as it’s such a big project,” Aherne tells us, and as a man who once released a record with over forty tracks on it, an album might be bigger for him than most. “I just wanted to do songs this year without having to be coherent. There have been songs as a band, as a three-piece, and just solo stuff, as well as longer, more thematic pieces. With this project, I have the freedom to do that.”

The result is – in the best possible way – weird. On the latest two-track, Aherne explores the festival of Samhain, but throws an Ace of Base cover as a b-side (“it’s okay, because it’s one of the tracks that isn’t written by the Nazi one in the band”). Earlier releases – each presented with a kind of abstract, newspaper print EP cover – include a cover of Lally Stott’s 70s hit ‘Chirpy Chirpy Cheep Cheep’ and a jaunty summer ode to doing things yourself and Factor 50 sunscreen.

Things have been more fantastically odd in the past, though, like the time Aherne released a jokey press release for a track claiming that he’d died. Having taken it seriously, an American publication ultimately released a brief expose ‘revealing’ that the musician – who’d never been less than active on social media in the meantime – was still going strong.

“There was some grief,” he recalls. “Some blog ran a piece on the track, saying that sadly I’m dead now. The PR ‘story’ was that the track was put together from shoeboxes under the bed. The comments section had some mad stuff in it after people realised. There was one guy who said he couldn’t believe this guy, and that I deserved to be dead, and someone who is dead should get to take my place. Then a Chicago place did an expose that I’m not actually dead. I did find it funny.”

The routes of much of what Aherne does is very much DIY: recorded in the small hours after grabbing unfashionable slots in studios, with live shows performed in the company of a revolving collective of musicians.

Much of that ethos is taken from Popical Island, a Dublin musical collective with a cross-pollinating approach to their music, at which Aherne sits at the very heart. Over the years, that’s often meant being part of several bands at the same time; essentially dedicating a life to producing this beautifully expressive but slightly strung-together form of guitar-pop music. 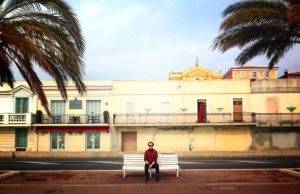 Popical Island and their bands never fully broke out of the Dublin underground. Their notoriety peaked with a bit of radioplay, and the occasional nod for various acts at events like the Choice Music Prize, but the label were beloved on the local music scene because whatever they released was sure to be colourful, charismatic and effortlessly charming.

Despite his boisterous stage persona and distinctive pop voice, Aherne is softly spoken as he describes where his career is today. “Most of my other projects are a bit in the background now. Paddy Hanna is working on his own, so both Ginnels and Grand Pocket Orchestra [two other bands Aherne plays with] are kind of on the backburner for now.”

“Popical Island still exists, but we don’t have a physical address anymore. It’s gone back to being in our hearts, but it’s way less than it was a few years ago. Some people became parents, or got married, or got more serious jobs. There are a lot of great bands doing a similar thing in Dublin right now,” he explains, joking: “I guess we had our own thing, but we’re past it now.”

The DIY ethos works in a very practical sense for Aherne. “A lot of bands would be writing for a couple of years, then going into the studio to make this perfect package and stuff. That’s not my thing. None of my favourite artists have ever prescribed to that sort of thing. I’ve always liked being like that. I just do something and put it out, I don’t have somebody coming to me saying ‘don’t put that online, you should wait a few months and we’ll do a big PR campaign.’”

“I prefer doing things my way, and it’s a common thing now. There’s more DIY music going than ever before. There’s a lot of young kids around 20 in Dublin who have these amazing, fully-formed albums online. I think the technology’s made it possible for us to do the DIY thing more than ever before. It’s not a competition; it’s great. If you have the patience for a big campaign and all that, more power to you. That’s just not who I am. I like messing with people. One of my big influences is that TV show ‘Nathan For You’ [an oblique parody of the business consultancy world]. I just like doing this mad stuff.”

“I love albums, and I definitely want to put another one out,” Aherne tells us, “but we’ve reached a point now where releasing albums doesn’t really work anymore. In a way, I’m going back to that 60s thing, where it seems kind of cheesy but it’s always kind of catchy with it. I categorise it as bubblegum pop. It sounds cheesy on the surface, but if you delve deeper, it really has something to it.”