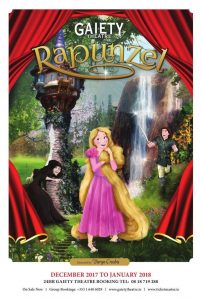 “The whole thing is really physically demanding, because it plays every day, sometimes twice a day. You end the run exhausted. You wake up at half 8, have sound check at half 9 or 10 o’clock. Then there might be a kids show or schools show at 11. At 2pm I’ll get a couple of hours to just wander around town a bit, get some food, and then we do it all again. It’s a challenge, but it’s really rewarding. I love watching the kids react.”

The noise, in fact, is part of the experience. “It’s an interactive thing, and that really adds to the experience. It’s full of young kids, ones who shouldn’t really be watching things like Love/ Hate, but they all seem to know me as Pauley. Once, I was standing on the balcony in a Peter Pan scene a little after that Love/ Hate episode ran, and one of the kids yells out ‘don’t jump’. I still get approached by kids calling me Pauley.”

With the Tivoli panto having made its way onto TV in recent years, Ward also feels the in-person side of the Gaiety (which has never been televised) is something special, something to be protected. “Personally I don’t want it on TV,” he explains. “It’s not about the cameras, it’s about the screaming and the interaction, about the tradition and the experience. You can’t capture that on television.”

Ward should know. There’s quite a step between the darkness of Pauley’s like and the lightness of a fairytale story like Rapunzel, but as we head towards December, that lightness just seems like a natural adjustment. It’s the spirit of Christmas represented in the business of the actor, a fun-filled slog that’s ultimately about handing their holidays over for the kids. Expect a little bit of magic.

Rapunzel runs in the Gaiety Theatre from November 26 to January 7, with tickets from €19.50, available now.