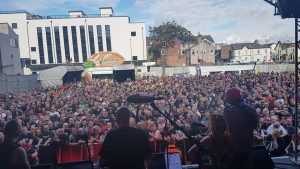 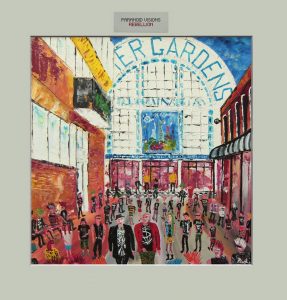 Most recently, Paranoid Visions have been heavily involved with a real hero of theirs, inviting Steve Ignorant of British punks icons Crass into the fold at regular intervals. The unlikely combo has led to shows before thousands, and boisterous records that have exploded on the punk scene.

“We put on the Last Summer tour in Dublin, and kind of got along. Steve’s very shy, but very personable,” Jones explains. “He found that when he came over here, there’s none of that tongue-tied stuff, he just got slagged by people like us. He really liked that, really connected with it.”

“We played with him again in Manchester and were supposed to play New York, but it got cancelled. We ended up doing the final wrap-up gig in Shepherd’s Bush Empire instead. Afterwards we had this amazing after-show party and really got to know him. Later, we told him we had this song, and we were having problems getting the vocal right; that we basically wanted it to sound like him. And he said ‘I’ll do it’. So he came over and did it, and ended up doing the verse on another one, too.”

“So there were two tracks, two lots of vocals done in two hours, and that included a tea break, a chat and a play with the dog. Afterwards we went out down the Foggy Dew, and he said ‘this reminds me of the first two Crass albums. There was no time for messing around, we just got in and did it. We got studios cheap in the middle of the night. That’s what I love doing, and that’s where I came from. I’ve really enjoyed this, if you ever want to do anymore give me a shout.’”

Paranoid Visions and Steve Ignorant agreed to make an EP, which later became an album, with the label later insisting that live shows were included, too. Things haven’t really looked back.

“Initially speaking [the two versions of the band, with or without Steve] were two radically different things,” Jones recalls. “The way he sees it is that there is only one band, that has his name in it when he’s with us, and we change the set list to accommodate him – we don’t have quite as much stuff to choose from. But we have stuff that we only ever do with Steve, and then three or four just random tracks from our stuff that he doesn’t take part in.” The band have played in both forms at some festivals, the double appearances a chance to experiment with the two sides of the band.

As well as the addition of Steve Ignorant as a potent vocalist, the reason for Paranoid Visions success today is simple: politics. Jones isn’t afraid to delve into his views, in which he broadly condemns the present-day political class, slams Brexit and Donald Trump, and rallies against self-involved nationalism.

His band do much the same, delivering a visceral, creative swipe at political convention in the time of populism, and expressing an affection for the developing fringes of hip-hop that are doing the same. Right now, with populism on top, a vocal dissenting voice like Paranoid Visions could hardly be more relevant.

New album ‘Rebellion’ – which does what it says on the tin – is out now.