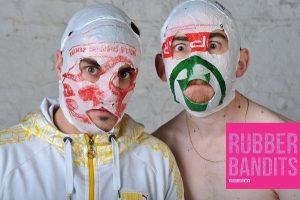 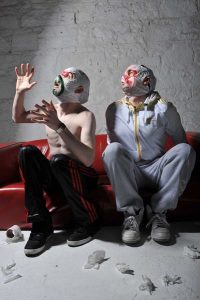 There’s a certain confidence that comes with addressing serious issues anonymously from behind the mask of a holey plastic bag. By engaging with Blindboy (who tends to be the louder of the pair on the issues), it’s very difficult for a TD, for example, to come out well.

That Blindboy’s angles are so astute and well reasoned is one thing. He’s also advantaged by the very nature of the argument: should a rival outwit the rapper (and it’s rare), they are nevertheless arguing with a silly comedian, typically topless from the waist up, and facially ensconced in a plastic bag. And the man in the bag usually comes off the more reasoned and intelligent.

From such a platform, The Rubberbandits – in particular through their social media – have loudly railed against perceived injustices, and done so to huge audiences. Their Facebook alone, for example, has 420,000 followers.

Last week, they posted “Something tells me we’re going to look back on direct provision centres in the same way we now look back on abusive Catholic institutions.” There’s no joke there. No punchline. It’s a direct railing against a government policy stated succinctly and potently. They went on to get involved in the replies, articulately explaining their reasoning, and encouraging readers to get in contact with their TDs about the issue. Over 2000 different readers engaged with the post.

Just inside the last month, they’ve posted – in amongst pleas for help finding a missing cat, and a handful of comedy skits – a similarly strong message encouraging Leo Varadkar to work on mental health and housing issues. They’ve extolled the virtues of a ‘snowflake’ generation, talking of the mental health benefits that come from being open about feelings. They waded into the Herald’s mistaken use of a picture of rapper Stormzy in place of Romelu Lukaku, pointing out hypocrisies to those playing down the significance of the error.

This stuff, clearly, is way beyond the normal remit of a comedy act. They’ve moved realms, in a sense, to a world where they’ve learnt they can punch above their weight. In doing so, the Rubberbandits have become a serious voice for socially liberal, left-wing values, one that can seem oddly lacking amongst the political classes.

Hip-hop – especially home-grown hip-hop – has never held as much cultural weight in Ireland as it does today. In acts like Rusangano Family, Rejjie Snow, Lethal Dialect and Tempermental Misselayneous, there are suddenly voices willing to critique loudly in their music, and that’s progress, especially in a time of political upheaval.

For all the unquestioned brilliance of Rusangano Family’s work, especially in the immigration commentary of ‘Heathrow’, Rubberbandits are the act that have crafted a public voice outside of their music, and they’re relentlessly, vocally and unapologetically opinionated. Blindboy Boatclub can seem an oddly articulate voice to those only familiar with his less serious musical output. He’s fast become one of the most astute political commentators in the country.