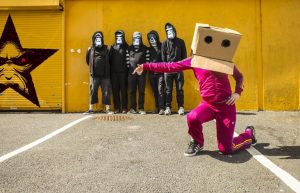 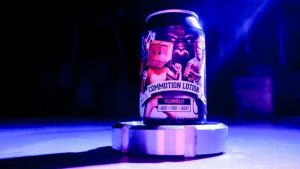 Whether the album or an incredibly notorious live show are the defining factor, there’s little doubt that King Kong Company are on an all time high this year. Last month, their striking imagery appeared on the front of a new brand of beer from Wexford craft beer company Yellowbelly, entitled ‘Commotion Lotion’, and infused with Buckfast. The launch came within days of their Glastonbury appearance, a lively slot at Body and Soul and a toned-down show at Aras An Uachtarain.

“We did a gig down in Cork, at the Irish Beer Festival last year,” Hoye recalls. “It was a really good festival with a lot of craft brewers at it. They approached us then about it, and we made the beer. Yellowbelly did all the imagery and everything. It’s very surreal to have your own beer, really odd.”

Then came the recent trip to Phoenix Park. “We had to censor [hit track] Donkey Jaw a bit,” Hoye says of the performance at the president’s house. “We were thinking of doing the full version at the garden party, but there were a lot of young kids there. It was censored enough to not offend. It was the strangest gig ever. We were very nervous about it at first, and I think the organisers were a bit nervous about it, too, wondering what we were going to do.”

“But our frontman, Mikey Graham, got on the mic at the start and said ‘listen, we usually play in muddy fields at festivals, so what we’re going to do is ask all the children if they want to come up to the front of the stage and dance’. So they did, and they all started dancing and it was great, we won everyone over within five seconds. It was a great honour to do it.”

And the future? Hoye admits that a new album isn’t really on the horizon, but adds “we’re always in some shape or form working on new music. A lot of the stuff that made this album we played live for a long time before we recorded. I think that’s just the way it’s going. We make music to play live, not to make an album, so it’s good to road test.”

Few bands ‘test’ with quite such a sense of fun.