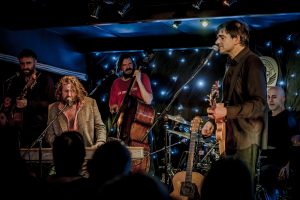 To many, it must have felt like that album would never arrive. “Pete [O’Toole]’s return to the band was the missing link in terms of making a record,” O’Maonlai explains of the bassist’s return to the band in 2015 after an eleven year absence. “He’s a musical tour de force.”

Hothouse Flowers date back to shared, music-obsessed 70s school days in Ballyfermot, a time in which O’Maonlai played in a band alongside My Bloody Valentine’s Kevin Shields, having pushed through his first forays into music slightly against the will of his parents.

“We went viral before the internet,” he recalls. “We were having a ball coming in every day and busking in Dublin. People were getting obsessed with record deals back then, with U2 doing so well. You could tell people’s heads were getting turned.”

“I only recently heard that Chris Blackwell [the key Island Records man who worked with U2 and The Cranberries] said in interview that his only regret is not signing us. That would have been a great deal. But we were cock sure of ourselves back then. We were bringing houses down, we’d been playing live since we were nine or ten years old in different bands. If you’d try to invent it, you couldn’t have.”

More recently, Hothouse Flowers have been very much about the live outings, but their sound has also been adapted by some impressively out-there experiences exploring other aspects of music. While O’Braonain has leaned more on family life, O’Maonlai has been seriously exotic in his outlook.

“Africa’s one of the seedbeds of rock and roll,” O’Maonlai says of his exploration of music in Mali. “The 6/8 rhythm is all over Irish music as well as rock and roll. It’s such a rich tapestry. It’s tough seeing these countries almost being censored from the world when there’s so much richness in them.”

O’Braonain, who was living in France a few years ago, worked with Belinda Carlisle on her pronunciation for an entire French language album, and ended up dueting with the singer “kind of by accident. I was a placeholder for other singers, but she ended up using my vocal,” he explains.

The band also got involved in the Apollo House movement, after Glen Hansard got in touch. “He told us to keep our ears to the ground; he called together mates to be the musical face of the thing. Eyes were on it because there’s a relationship to music, and music’s an in-between territory that doesn’t label anyone. Music is not capitalist, or black, or white. Musicians can be involved in very important things just by being present sometimes. It’s a very elemental force,” O’Maonlai says.

“We were involved in a festival years ago that played a role in stopping a nuclear reactor being built in Wexford. It was different back then; we went down to the garda station and told them what we were doing. Any trouble was dealt with quietly by the organisers. We’ve never really moved away from that day, politically. The idea that a government can ever rule a country is ludicrous. It’s all a farce, the idea that anyone can really be in control. Just a construct.”

As for the future? “I think we’d stop if we weren’t enjoying it.” O’Braonain says. “We still have that love for finding the heart of a room. It doesn’t really matter which room. A tough room can bring out great music. When we went out to play, we never did not know what we were going to do. Our career has hinged on that, on those days. We’ll keep going as long as it’s still there.”

Hothouse Flowers bring their powerful live show to Live at Leopardstown on July 13.