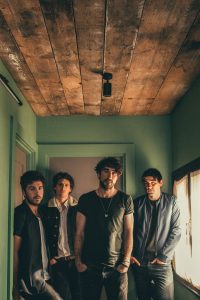 “I don’t want to say anything that sounds like I’m putting down [previous label] Universal, as they were really good to us, but this is the right move, and it’s a really exciting time. With a bit of luck, the label might outlive the band.” 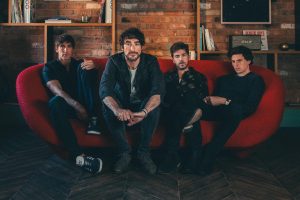 The band, clearly, are growing up fast. O’Reilly is the son of Mary Black, so he’s always been around the music scene, and recalls attending shows before his age hit double figures, and seems to live for the music. With marriage and life commitments coming into play for other members of the band, however sharing a house all together in London wasn’t proving practical anymore. If anything, the time apart – and separate experiences – has made The Coronas writing process more imaginative when they’ve come back together.

“We work best just locked away for a month,” O’Reilly explains of the trip to Dingle to write this record, after deciding they needed some “time off, including from the high rent,” and time to spend on their own lives. Dingle, and the album recording, was the perfect reunion.

“They’ve got the whole musical history down there, with [RTE televised festival] Other Voices, as well as all kinds of artists, films, food, and it’s that extra hour away from Killarney, which makes it that much more out of the way. We’ve all been down to Dingle since we were on kids holidays, so it feels very normal to be there, but it’s a special place.”

Initial reactions to the album have been strong, though O’Reilly admits that he’s developed a high tolerance of negative reviews and critical commentary, preferring to let fans judge.

“We were never really critical darlings, and often written off as ‘just’ a student band,” O’Reilly argues. “I’ve got pretty thick skin about it now, to the point where – as is often the case in music – I’d worry that a good review might mean it won’t sell. But then again, this has been getting quite good reviews. We’ve played a few tracks live over the last few months, and they’ve been going down well, and the single seems popular with fans. That’s more important, really.”

The fans are certainly still buying from the band, anyhow, with The Coronas set to play their biggest headline show to date this summer, at the Royal Hospital Kilmainham in front of an audience of 15,000.

“We’re sort of at different stages as a band in different places,” O’Reilly says of the huge range of audience sizes they perform before regularly. “We play big venues in Ireland. We’d play Ulster Hall in Belfast and we’re a bit bigger in London than in the rest of the UK. It’s totally different depending on where you go.”

“We’d be looking at Coldplay and trying to take aspects of their show that we like, trying to put on a really big stage show for something like Kilmainham. We’ve always invested in production; in our performance. Obviously you can’t do that in the same way when you’re playing in front of an audience of a few hundred, and that would totally change your setlist, too. But for something like Kilmainham, it’s really important for us to make an effort with what we do on stage; for it to be about more than the music.”

As for their latest incarnation as a band – the more mature, evolved version of The Coronas?

“We chose the title ‘Trust The Wire’ because it represents us as a band on this album. We’re refocusing, realigning our own ambition and trying not to doubt ourselves,” O’Reilly concludes. “We’re really taking the plunge.”