One of Korea’s most distinct cultural outputs, KPop is world renowned, and – led by the comic satire of Psy in recent years – has established a genuinely global audience, with the US, in particular, a huge market. Its stars, though, rarely appear in Ireland.

Rarer is a showing from a Korean rock act – in fact, it’s probably not even an annual event – and it’s a genre that two years living in Korea taught me is genuinely impressive. The arrival of Seoul act Billy Carter on our shores this May, then, marks an unusual event for the Dublin music scene. We caught up with singer Kim Ji Won ahead of their Whelan’s show at the end of this month.

A lively bunch, Korean psychedelic psychobilly rockers Billy Carter (빌리카터) find their spiritual home in the Seoul student district of Hongdae. That means they’re born out of Korea’s young rebellion: an escape from cultural conservatism, they developed amid an arts-focused drinking district, a party spot where the soju flows like water, and sweaty basement rock gigs are long the norm. Breaking out is less common.

Speaking of the rarity of getting gigs around the world for Korean acts – and particularly for Korean acts that fall distinctly apart from the Kpop genre – Billy Carter vocalist Kim Ji Won explains “Hongdae got extremely huge and full of tourists and local people who want to hang out. Rents got very, very expensive, and so many live venues had to shut down or move. Still there are more venues in the Hongdae area than in any other part of Seoul, but we can find good venues in other areas too. Hongdae is our local but the atmosphere changed a lot. Maybe it’s time to move on to the bigger world.”

That bigger world has turned out to be quite welcoming: as well as Dublin, Billy Carter’s European trek will see them perform at Primavera, one of Europe’s biggest festivals. Relatively newly formed, it’s quite a rise for the band, who are keen to talk through a few of the tracks that have got them where they are.

“I’d like to introduce two songs from our album ‘Here I Am’,” Kim tells us, mentioning their latest record. “One is ‘The Dog’, written when I was drunk. In Korea, there is saying that goes ‘when people get drunk, they become a dog’ which is kind of negative meaning but I think dogs are better than people.” 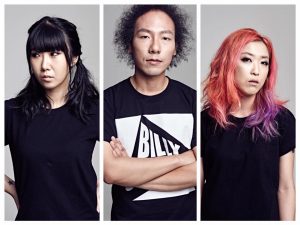 “So the song says, ‘when you’re drunk, be a dog rather than a bad person and love others’. Well… nah, I lied. The song ain’t nothing but a drinking song. Another one’s called ‘We Can Fight’. Everyone is fighting in some way to get something precious for themselves. Some will fight to get something material and some will fight for their ideals or rights. The song is about the fight we all fight.”

Though her talk of fighting isn’t literal – rather it links with a common ‘Konglish’ cultural rallying call often shared socially, a motivation shout of ‘fighting’ – Kim certainly doesn’t shy away from on-stage drama, something Billy Carter call getting “emotionally naked.” The band are particularly known for once playing a show dressed entirely as Ronald McDonald’s, and for Kim’s tendency to drop to the floor as she belts out their lyrics.

The three-piece are deliberately not what their name would suggest. “We made an imaginary person who’s totally different from us (gender, race, nationality, looks and so on) to make people never imagine us when they hear the name for the first time. And we named him ‘Billy Carter’,” Kim explains, “which is a combination of a very common name and surname.”

Progress outside of Korea is a huge barrier to Billy Carter, as it proves for many Asian acts, and their presence in Dublin is unlikely to be a regular one, meaning the gig is a real ‘once off’ to check out. Claiming Iggy Pop as a key inspiration, Kim says “it’s definitely a challenge [to progress abroad]. But music is universal so if the music is good, I don’t think it’s impossible. Of course, we need money to book flights and time to book good shows but it’s worth a try for many reasons.”

“It’s our first LP so we wanted to tell people about ourselves. Something more emotional and deep. Each song shows our different inner selves in a different way. We started as an acoustic duo and since we became a three-piece, and the sound’s got totally different. Now we are more a rocking and rolling kind of band enjoying crazy moments on the stage, but we still sometimes play acoustic sets with [drummer] Lee’s percussion”.

As for the night at Whelan’s? “Irish people are crazy partiers, right?” Kim asks us. “We want a lovely pint of Guinness and some Jameson, and if we have a chance to visit Cork, some Murphy’s. Because I love Murphy’s, too. Let’s enjoy some music and booze, and let’s love each other.”