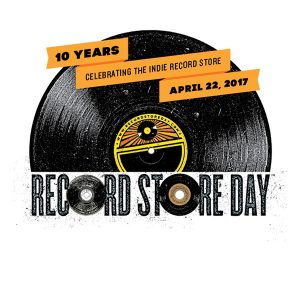 RECORD STORE DAY – celebrating its tenth anniversary on April 22nd this year – is a date on the calendar I prefer to my own birthday. As intrinsically ‘music nerd’ as that statement is, there’s nothing quite like being let loose with a heap of shiny new vinyl, live acts occupying a stage one after the other.

From watching Lykke Li wow Tower Records’ old Wicklow Street outlet in 2011, to snapping up one of only five copies of local label Delphi’s beautiful, partly hand-made EP collection, there have been plenty of local highlights for me, but I’ve also become convinced that the day is important in a broader sense, to the music industry at least.

It’s notoriously difficult to survive as a full-time musician. As quirky Clare dance star Daithi told us in an interview a few weeks ago, he has to play 150 shows a year to get by. That might not sound outrageous until you realise this is a man who plays the main stage at multiple annual music festivals, gets featured in NME and only has to financially support himself, not an entire band. His is one of the better scenarios you might find, and he’s very clear: selling records simply isn’t a way to survive anymore. With this in mind, Daithi largely produces a series of EPs instead.

But Record Store Day is different. It has a simple ethos: support the independent. HMV may have cynically jumped in a couple of years ago with their own ‘vinyl day’ on the same date, but the genuinely unique imprints are only distributed to independent stores, who more often than not take the chance to ask in any local or visiting international talent they can grab on the day (Kila and Ham Sandwich will play in – or in association with – Tower Records this time around).

The result is a lot of record sales, many of them, surprisingly, outside the special selection rolled out for the day itself. Many would argue that selling records isn’t important in the modern music industry, and there is an argument to be made on that, but it comes in the context of a new reality that’s hard to accept for music fans. Records are not advertising (or at least, broadly speaking, singles advertise better, and cost less). The end-game of indifference to paying for albums, in the longer term, is the death of albums.

They will always be art for art’s sake – and so there should be – but it’s more than reasonable to suggest that many of the great albums wouldn’t exist if they were destined to be nothing but massive loss leaders for live tours. Pink Floyd’s The Wall, which contains ambient sounds recorded from a Hollywood window, prank phone calls, the famous children’s choir and 16-track recordings on a single instrument (the drums) probably wouldn’t have existed, as it would have been financially daft if made today. Brian Wilson of the Beach Boys – notorious for his dislike of appearing live over recent years – may never have been able to pay to write anything had his records not sold. It is, in short, a huge loss to reduce albums to the supporting instrument for hit singles, or tours.

That might seem melodramatic, but it is happening. Of the twenty biggest selling albums of all time in the UK, only four were released this century (two by the irrepressible Adele). In contrast, seven of those twenty were released in the 90s. When Ronan Keating’s album was widely reported as being a major flop in 2016, selling just over 200 copies in its first week, it still charted at number 26 in Ireland, which serves to highlight how little profit there is to make even amongst those hitting the charts. If we generously assume Keating made €2 per album, all things considered, for the time involved he’d definitely have been better off doing almost anything else for income that week (and it’s more likely he made a loss).

Yesterday’s RSD loot… the one album i was after also happens to be an absolute work of art! @ilovealcopop #vinyl #vinylporn

That does mean, should they register for the album charts, there are probably a few Record Store Day releases that would go in quite high up the list, but the key to the day is twofold: scarcity and originality. Amongst this year’s releases are the usual selection of slightly daft offerings: a Flaming Lips album reimagined as having been performed on the International Space Station, for example, or an X-Ray picture disc recording of a Russian symphony orchestra. But there’s also unreleased Bowie live shows, a gorgeous Alice Coltrane jazz harp improvisation and an early Bruce Springsteen live recording on offer.

That’s not to say the day doesn’t have its faults. Plenty of labels use Record Store Day cynically, as a way to relaunch ‘limited editions’ of bang average albums containing nothing extra or different. The genuinely unusual records often go for a fortune as resales on eBay. Last year, reports of vinyl printing presses putting their prices through the roof ahead of the day, citing demand, starting doing the rounds. But despite all this, Record Store Day serves to remind and focus fans of albums in their physical form.

Little in life is flawless, and Record Store Day is a real celebration; one that’s not about the booze, the party or the venue, but very directly about the music itself. One that benefits musicians and the stores that support them, and does something special for fans. A day a year when being a nerdy, vinyl-loving music aficionado flicking through the racks is more rewarding, home to signed merch, surprise performances and a new depth to the rush of discovery. Better than that, it genuinely rewards creativity. Once a year, in April, the album is back on that artistic pedestal.

A full list of Record Store Day releases – not all of which will be available anywhere in Dublin, as distribution is random – is available on recordstoreday.com